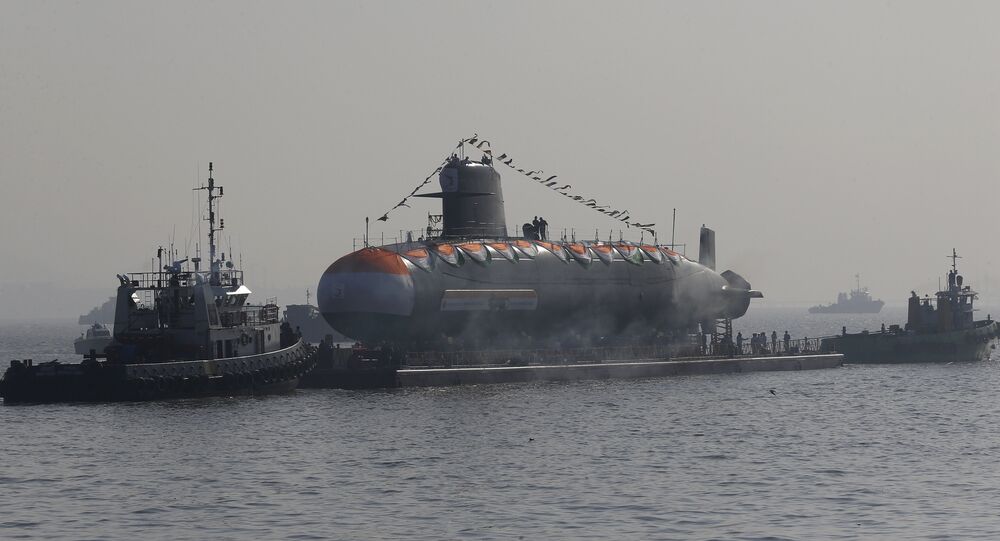 The 1565-ton Scorpene class submarine is a critical asset in a war like situation with Pakistan as the shallow Arabian Sea does not provide required depth to the larger boats like the Kilo-class, or the six nuclear-powered attack submarines that India plans to build.

New Delhi (Sputnik) – Indian Prime Minister Narendra Modi will be handing over India’s first locally built Submarine – christened INS Kalvari — to the Indian Navy next month. The much-awaited diesel-electric Scorpene class submarine is the first of the six such submarines being built at Indian shipyard with the technical support of French naval shipbuilding firm Naval Group, earlier known as DCNS. The submarine would be sent to the Indian Ocean on operational deployment soon after it is handed over to the Indian Navy. However, it would be some time before the vessel is fitted with torpedoes – its primary weapon.

The boat was scheduled to serve the Indian Navy from 2012; seven years after signing of the deal. However, the Indian firm MDL’s ineptness in absorbing the technology transferred by Naval Group delayed the project by five years, according to sources.

© Photo : Youtube/DefenseNewsX
India Close to Launching Second Indigenous Nuke Submarine
INS Kalvari would be the 15th boat to joint Indian Navy’s submarine fleet in the Indian Ocean. However, Indian Navy requires at least 24 submarines in the Indian Ocean region to maintain its superiority over Bangladesh and Pakistan who are poised to soon deploy additional submarines sourced from China. Out of the 14 Indian submarines already present in the Indian Ocean, 13 are conventional boats that are 17-31 years old and need an immediate upgrade. Moreover, the entire fleet is not battle-ready so deploying all of them at a time for war would not be possible for India. The second locally built Scorpene class submarine named INS Khanderi is undergoing sea trials and would only be available to the Indian Navy next year.

Meanwhile, INS Kalvari will set sail without its primary weapon torpedoes because the $200 million tender to buy them remains in limbo. The Indian government had to roll back its initial plan of purchasing 98 Black Shark heavyweight torpedoes from WASS as its sister company AugustaWestland faces corruption charges relating to the infamous VVIP chopper scam in India.