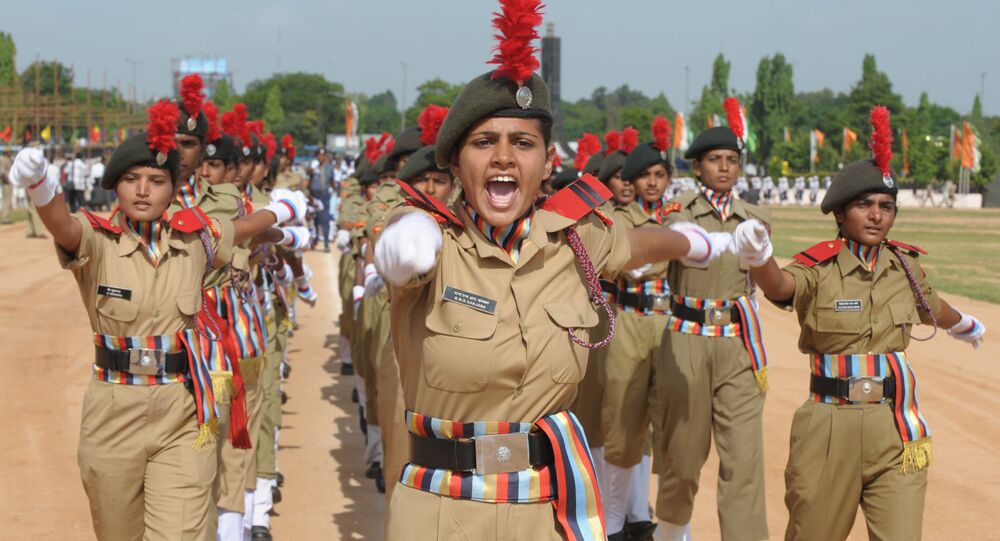 The Indian Army will be inducting 800 women soldiers this year and has plans to increase women's presence with a yearly intake of 52 women soldiers. The Indian Air Force inducted women fighter pilots last year. The Indian Navy has also undertaken a project to deploy women in warships.

NEW DELHI (Sputnik) — In a historic decision aimed at overcoming gender inequality in the armed forces, India's first woman defense minister has approved a plan to induct 800 women combatants in the Indian Army. Sources told Sputnik that the newly appointed defense minister, who is also India's first woman to independently handle the position, approved the plan that was pending since long, the same day it was laid before her.

© AP Photo / Aijaz Rahi
Indian Army Chief Does About Face: China, Pakistan No Longer Threats
Earlier in June this year, Army Chief General Bipin Rawat had hinted that the Indian armed forces would soon be getting women soldiers and that the process would start with the induction of women into the military police corps.

Currently, women are allowed in select areas such as medical, legal, educational, signals and engineering wings of the Army.

"The proposal is being finalized for induction of approximately 800 women with yearly intake of 52 per year," official added.

Corps of Military Police plays a crucial role in policing cantonments and army establishments, preventing a breach of rules and regulations by soldiers, maintaining movement of soldiers as well as logistics during peace and war.

The Indian Army had been citing operational concerns and logistical shortcomings for keeping women out of combat roles. The Indian Air Force, however, allowed women to assume fighter positions in 2016 and inducted three women fighter pilots. The Indian Navy is also considering the idea of deploying women on warships.