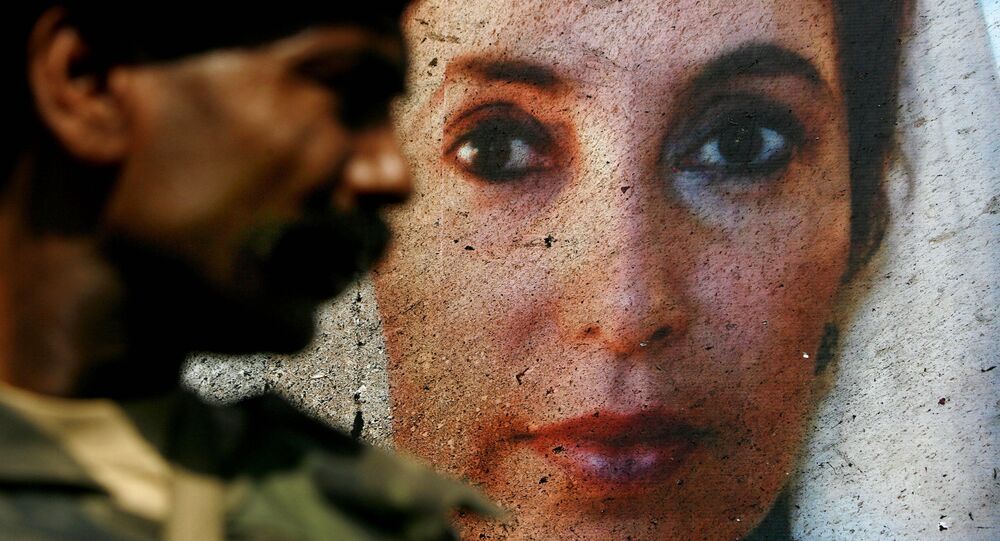 A court in Pakistan has acquitted five men of murdering the country's former prime minister, Benazir Bhutto, in 2007. A Pakistani journalist told Sputnik why senior police officers and Pakistan's former military ruler were also implicated in the case.

The five attackers were believed to be militants from the Tehrik-i-Taliban Pakistan (TTP), and on Thursday, August 31, all five were found not guilty by the Anti-Terrorist Court in Rawalpindi.

​Asad Malik, a reporter with the newspaper Daily Dawn, said General Pervez Musharraf, who fled Pakistan in 2016, was also implicated.

"Initially five TTP men were on trial, but after a UN report and a Joint Investigation Team two senior cops were implicated and accused. General Musharraf was also nominated as an accused," Mr. Malik told Sputnik.

​On Thursday, the court officially declared Musharraf an absconder. He moved to Dubai in 2016 after a travel ban was lifted.

Nine Years to Reach a Verdict

On Monday, August 28, Judge Asghar Ali Khan said the verdict would be delivered before the four-day Eid vacation.

And on Thursday, Rafaqat Hussain, Husnain Gul, Sher Zaman, Aitzaz Shah and Abdul Rashid were all acquitted of murder.

© REUTERS / Akhtar Soomro
'You Do Feel Threatened': As Pakistan Turns 70, Taliban Threat Worse Than Ever

Deputy Inspector General Aziz was accused of not conducting an autopsy on the body, although he claimed he was told not to carry one out by Ms. Bhutto's husband, Asif Ali Zardari, who later became prime minister.

The trial started in 2008 and Mr. Malik explained why it had taken nine years to reach the verdicts.

"The [then] PPP government first went to reinvestigate the murder and also asked the UN for a probe. Subsequently, General Musharraf and two cops were implicated. Eight judges in the Anti-Terrorism Court have changed since 2008," he told Sputnik.

In 2013, the chief prosecutor, Chaudhry Zulfiqar Ali, was shot dead by Islamist militants as he drove to a hearing.

Mrs. Bhutto, 53, was killed on December 27, 2007 when a gunman and a suicide bomber attacked her entourage at an election rally in Liaquat National Bagh, a park in Rawalpindi.

She was killed when she stood up and put her head out of a sunroof-style escape hatch in the bombproof vehicle.

During the attack a gunman opened fire with a gun while at the same time a bomb was set off which killed 20 PPP supporters.

PPP officials claimed she had died from gunshot wounds but British police, who were called in by the Pakistani authorities to investigate, concluded she died from a head injury when she collided with the side of the sun roof following the bomb explosion.

The trial also heard, in 2015, from the ill-fated vehicle's driver that Ms. Bhutto's political secretary, Naheed Khan, had told her to stand up and wave to the crowd moments before the attack, something Mrs. Khan strenuously denied.

​General Musharraf, the army chief who was president at the time of the killing, blamed the assassination on Pakistani Taliban chief Baitullah Mehsud, who denied any involvement.

Mrs. Bhutto herself released a letter when she returned from exile in the fall of 2007 in which she said President Musharraf's government should be held responsible if she was killed.

"The charge against General Musharraf is that he threatened Ms. Bhutto prior to her arrival in Pakistan and he also did not provide her with adequate security," Mr. Malik told Sputnik.

Responsibility for the assassination remains shrouded in mystery.

Mrs. Bhutto was a hugely important figure in Pakistani politics.

She was the daughter of Zulfiqar Ali Bhutto, who was deposed and then hanged by the military in 1979.

She took on the leadership of his Pakistan People's Party (PPP) in the 1990s and became the first woman prime minister in a Muslim country.

But she frequently clashed with the army and her secular views also made her deeply unpopular with the Taliban both in Pakistan and Afghanistan.

The PPP is currently led by Ms. Bhutto's son Bilawal, but earlier this year Ms. Khan applied to Pakistan's Supreme Court in a bid to register the name PPP for her own political party.

India and Pakistan Turn 70: Now What?