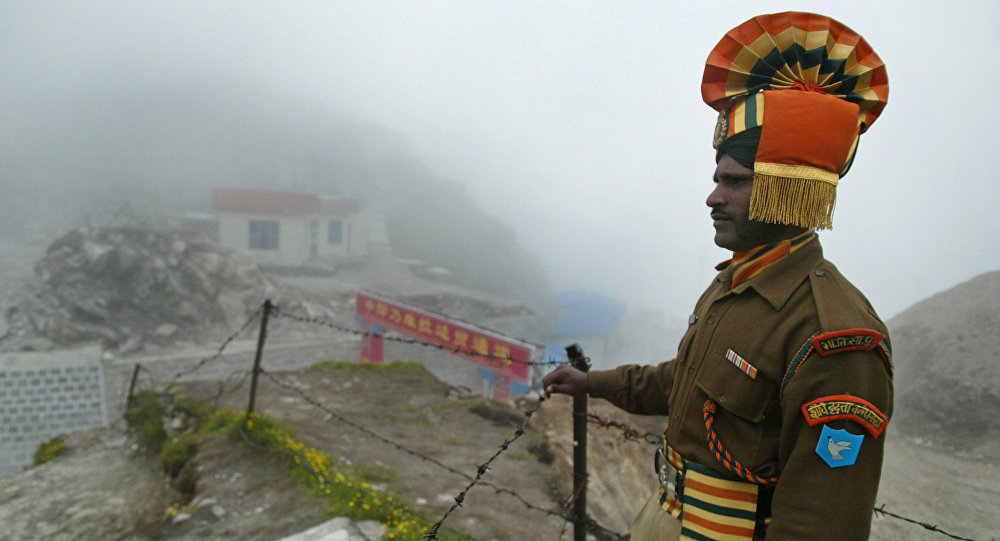 With the tensions between India and China, two countries with among the fastest growing economies in the world, over the strategic Doklam valley showing no signs of abating, Sputnik Radio talked to Chinese analyst Dr. Wang Dehua about what the chances are that a military confrontation will erupt between the two nations.

India and China have been engaged in a months-long standoff over the Doklam Valley in the Himalayas, with each side exchanging warnings that it may resort to military action.

The Chinese Defense Ministry has even invited a delegation of Indian journalists to Beijing and briefed them about the Chinese government's official position on the conflict in the follow up to Chinese media reports of a possible ‘small scale military action’ to weed out Indian troops from the disputed area.

© AFP 2019 / DIPTENDU DUTTA
China Refutes Media Speculations of Small Scale War With India
Chinese Defense Ministry spokesman Col. Ren Guoqiang has made it clear that the Peoples’ Liberation Army is not planning any military actions in the area.

However, Indian broadcaster India Today reported that the country's Defense Minister Arun Jaitley said on Wednesday that "India has learnt its lessons from the 1962 war."

"I agree that some challenges are still there. Some people are targeting our country's sovereignty and integrity. But I am fully confident that our brave soldiers have the capability to keep our country secure, whether the challenges are on the eastern border or the western border," it quotes Arun Jaitley as telling Parliament on the 75th anniversary of the Quit India movement on Wednesday.

Sputnik Radio spoke with Dr. Wang Dehua, a professor at the Shanghai Municipal Center for International Studies, about what the chances are for a military confrontation between the two nations.

"I think that the conflict may develop into a full-fledged military confrontation; the idea cannot not be excluded if New Delhi continues to refuse to listen to the Chinese authorities. But I am still confident that it can be resolved peacefully, as I think that Chinese and Indian leaders both have enough wisdom to do it," he told Sputnik.

Dr. Wang also pointed out that both countries are members of BRICS, and China's Fujian Province is going to host the 9th BRICS Summit in September. Therefore, China would welcome other BRICS member states and Russia in particular, to play as a mediator in this conflict, even though the solution will mainly depend on the dialogue between India and China.

© AP Photo / Andy Wong
India's Reaction Over Possible Military Operation in Doklam Reflects Lack of Self Confidence - Expert
China has accused neighboring India of creating infrastructure and deploying a large number of troops on its side of the border of the disputed area in the Himalayas.

According to Beijing, India’s recent activity shows that New Delhi is not interested in a peaceful resolution of the standoff.

The area in question is the strategic Doklam Valley, located near Bhutan. Tensions in the region heightened in June, when India sent troops to the valley. New Delhi said at the time that the move was necessary to curb Chinese road construction on the Himalayan plateau, which violates the status quo.

Beijing, in its turn, views Doklam as Chinese territory, and claims that road construction aims to improve local transportation and help local herdsmen. Thus it accused India of breaching an internationally recognized border.

© REUTERS / Anuwar Hazarika/File photo
Dalai Lama Says India, China Should End ‘Not Very Serious’ Doklam Standoff
According to China, it had notified its neighbor about the works at the border as early as in May. However, India didn't offer any response through any channel.

Dr. Wang provided his reasons behind the standoff. He explained that India wants to turn Doklam into a disputed region in order to "have leverage on China in the talks over the borders. It wants to challenge China and to demonstrate to the West that India wants to play a bigger role in regional and the global affairs," he finally suggested.