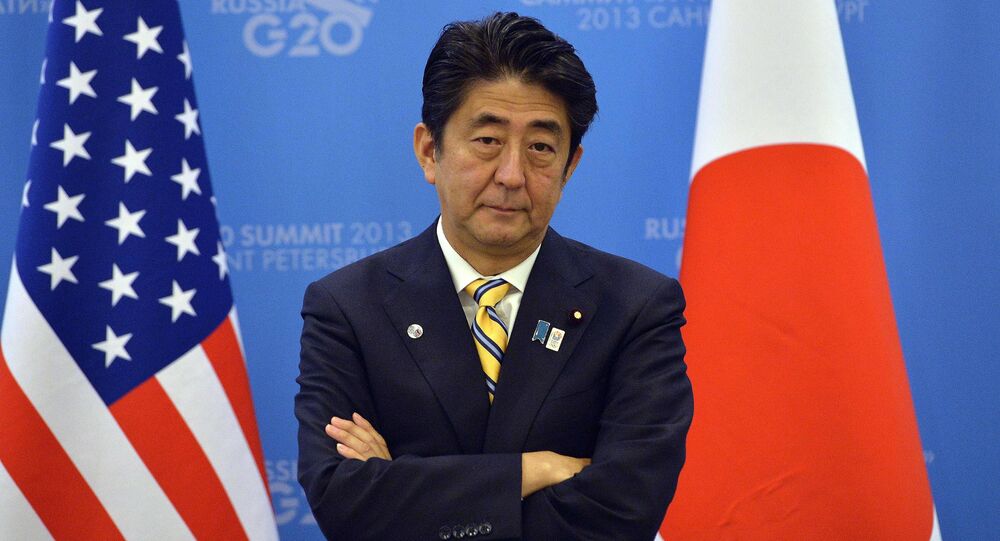 Toeing the Line: Japan Jumps on US Bandwagon With China Sanctions

Taking a cue from Washington, the Japanese government has imposed sanctions on the Bank of Dandong, a regional bank in China which is accused of financing North Korea’s nuclear and missile program. Chief Cabinet Secretary Yoshihide Suga announced the decision during a news conference in Tokyo.

© AP Photo / Wong Maye-E
Can Japan Convince Russia, China to Impose More Sanctions on N Korea?
The experts Sputnik has talked to all said that Beijing would respond by putting on hold the China-Japan-South Korea summit Tokyo wants so much.

On June 29, Washington said it was going to put the Bank of Dandong on its sanctions list for “acting as a conduit for illicit North Korean financial

Treasury Secretary Steven Mnuchin said on June 27 that, according to “concrete intelligence data,” the bank has served as a gateway for North Korea to access the US and international financial systems, facilitating "millions of dollars of transactions for companies involved in North Korea's nuclear and ballistic missile programs."

Mnuchin added that the US will continue to take "very significant action" against North Korea and would roll out additional sanctions against the county to cub its “illegal financial activities.”

The measures came after Washington had to admit that its hopes to use China to bring additional pressure against North Korea had fallen flat.

In an interview with Sputnik China, Valery Kistanov, an expert at the Institute of the Far East in Moscow, said that Beijing’s response to Tokyo’s  move would not be long coming.

He noted that, as a close ally of Washington, which ensures the country’s security in light of the alleged “North Korean threat,” Japan simply can’t afford not to back US  sanctions against Chinese companies.

“China is not happy to see Japan’s ramping up of cooperation with the US. It also believes that Washington is using North Korea as a pretext for  military muscle flexing. The dispatch of three nuclear aircraft carriers to North Korea smacks of US gunboat diplomacy and Japan’s support of such a policy only serves to stoke up tensions,” Kistanov said.

He noted that that Beijing had already responded by pushing back the China-Japan-South Korea summit and it looks like Tokyo’s recent warming to China’s “one belt, one road” project will prove short-lived.

© CC BY 2.0 / Ryan McFarland / $10 and the US Treasury
Got 'Em by the Bonds: 'If Trump Sanctions China Over N. Korea, US Economy Would Tank'
Still, the current cooling off of relations between Tokyo and Beijing does not mean the end of all other contacts between them. China wants to mend fences with Japan, and if President Xi Jinping and Prime Minister Shinzo Abe do meet on the sidelines of the upcoming G20 summit in Hamburg, this would mean that Beijing is ready for a continued dialogue with Tokyo, Kistanov added.

In an interview with Sputnik, Zhou Yongsheng, a foreign policy expert at China’s Diplomatic Academy, said that Japan’s commitments to the US have driven it into a dead end, preventing it from improving relations with China.

“I think that Japan should be more preoccupied with its role in the region and fostering cooperation in the region, rather than looking for ways to please the US. Tokyo fears that if the current period of warming between Washington and Beijing continues, it risks being sidelined, hence its antagonistic stance vis-à-vis China,” Zhou Yongsheng concluded.