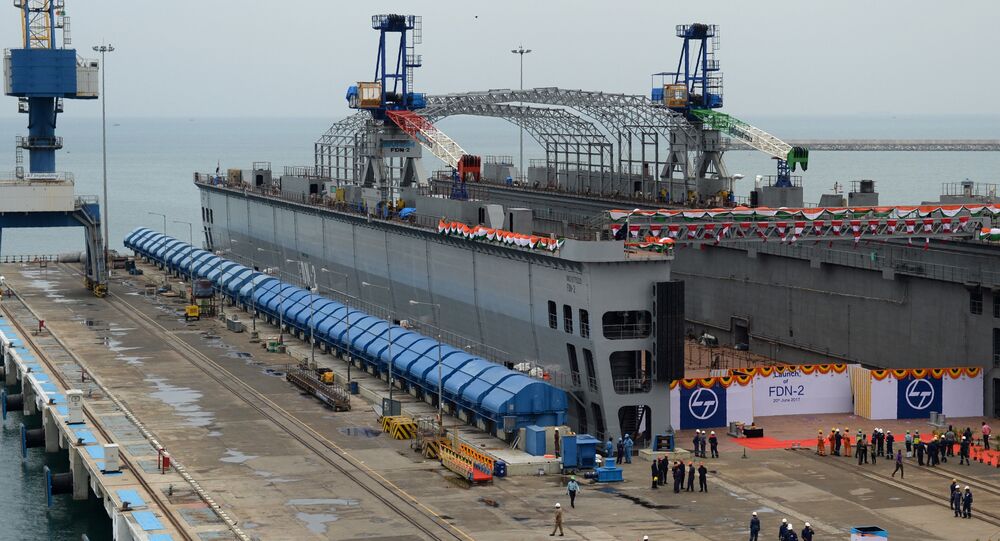 In a bid to strengthen naval power on the eastern coastline, the Indian Navy has decided to deploy an additional floating dock at Port Blair, which is very close to the Strait of Malacca, which connects the Indian Ocean to the South China Sea.

© AFP 2021 / JACK GUEZ
Indian Navy Chief to Visit Israel Before PM Modi
New Delhi (Sputnik) –The Navy’s decision holds significance in the backdrop of the massive naval presence in Bangladesh and Myanmar. Larsen & Toubro launched the first indigenously built floating dock (FDN-2) for the Indian Navy at Kattupalli in Chennai. After series of harbor trials, the floating dock will be stationed at the strategically important location of Port Blair. Once operationalized, it would enhance the technical repair infrastructure of the Navy for ships based at the Andaman & Nicobar Islands as well as for visiting naval ships.

The dock, 185-meter-long and 40-meter-wide indigenously designed and built platform with state-of-the-art machinery and control systems, is designed for docking Indian naval ships and submarines of up to 8000 ton displacement with droughts of up to 7 meters, during both day and night. Simultaneous docking of multiple ships and off-center docking options are also feasible. It has high capacity ballast pumps, along with advanced automated ballast control system. The vessel has been built at a cost of $70.3 million.

“The floating dock has been designed as a versatile dock that can be installed either along a jetty or moored in calm waters enabling round-the-year operation. It is provided with a hauling-in system to handle a ship’s docking and undocking operations. It can also support ships berthed along its side and meet their logistics requirements,” L&T said in a statement.

“Launching of the indigenously built floating dock, bears testimony to the capabilities available in India for realizing the ‘Make in India’ vision,” Vice Admiral DM Deshpande, Controller, Warship Production & Acquisition of the Indian Navy, said and commended L&T for their efforts in the design and construction of FDN-2.

Deployment of the floating dock near the world’s busiest shipping route will have high strategic value as the Indian Navy has started to deploy naval ships including amphibious ships and warships permanently at the Andaman and Nicobar Islands which is an attempt to renew its maritime policy to ensure its dominance cannot be challenged by China in the Indian Ocean Region.

India’s state-owned Defence Research and Development Organisation (DRDO) is also setting up the country’s land-based long-range missile facility at South Andaman’s Rutland Island which is approximately 200 kilometers from the Strait of Malacca.

“It is an affirmation of the in-house capabilities and track record of L&T that we are launching the FDN-2 for the Indian Navy ahead of schedule today, as a sequel to having already delivered 32 interceptor boats to the Indian Coast Guard,” Jayant D Patil, Vice President- Defense, Larsen & Toubro, said.