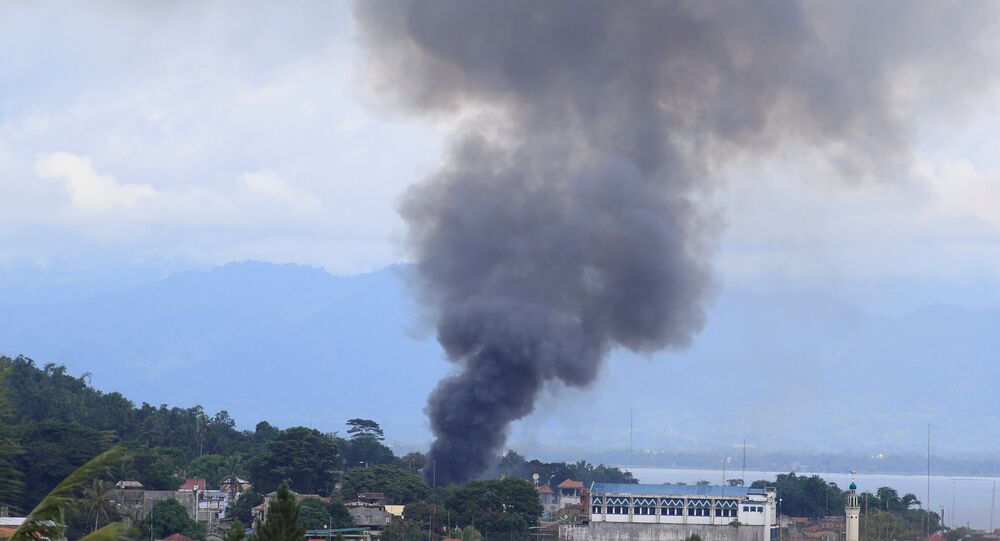 Philippine authorities on Tuesday told Daesh-affiliated militants occupying parts of the southern city of Marawi to surrender or die.

The Philippine military is confronting the Maute extremist group, which has pledged allegiance to Daesh, in an ongoing clash in the city. Maute fighters went on a rampage through Marawi last week in response to security forces raiding the hideout of Isnilon Hapilon, leader of local extremist group and Daesh affiliate Abu Sayyaf.

© AFP 2021 / BAY ISMOYO
Duterte Wants to Prevent Terrorists From Mosul, Raqqa From Coming 'All The Way to Southeast Asia'
Abu Sayyaf and Maute have combined efforts to try to establish a caliphate in the southern Philippines. Having acquired support from other local and foreign militants, the groups had been planning to launch a major assault on Marawi on the Muslim holy month of Ramadan, but attacked earlier, after Hapilon's near arrest.

Philippines President Rodrigo Duterte has declared 60 days of martial law across the country's second largest island of Mindanao, warning that Daesh had managed to unite a number of local militant groups behind its flag. Marawi, with a predominantly Muslim population of 200,000 people, is regarded as the heartland of the Islamic faith in southern Mindanao.

Over the past week, the jihadist gunmen withstood intense bombardment and street-to-street combat by the Philippine military, prompting the government's threats.

"We call on the remaining terrorists to surrender while there is an opportunity," Brigadier-General Restituto Padilla, the Philippines military chief of staff, said in a statement.

"For the terrorists, not surrendering will mean their sure death."

Padilla also told reporters the surrender call was aimed at limiting the loss of more lives and that it was just a matter of time before the military cleared extremists "from all their hiding places."

"We are going to fight every day until this conflict is resolved," Duterte said at a press conference.

© REUTERS / Kim Kyung-Hoon
Rights Group Warns Duterte Over Martial Law as Fighting Escalates in Philippines
Most residents of the city have fled, but up to 2,000 reportedly remain trapped in areas besieged by the militants, according to the local government. The International Committee of the Red Cross has voiced alarm that civilians could be caught in bombing raids or crossfire.

According to government figures, the crisis has already left more than 100 people dead, including at least 19 civilians, 20 security forces and 65 gunmen.

A Muslim separatist rebellion in the region has raged for decades, claiming more than 120,000 lives since the 1970s.