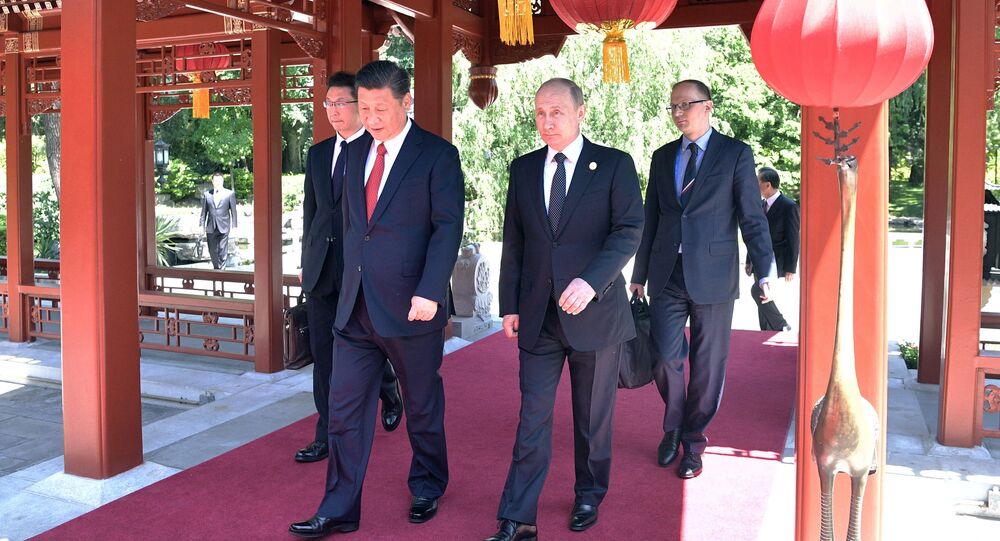 Russia and China Poised to Start 'Transport Revolution' in Eurasia

Russia is foursquare behind China’s One Belt, One Road project and will actively participate in its implementation, President Vladimir Putin said during a roundtable meeting in Beijing.

He also said that Russia wants to see China as a partner in implementing a transport revolution in Eurasia and establishing a greater Eurasian partnership to build a bridge between Asia and Europe.

“As far as I understand it, Putin also said that Western European and other EU countries could join these initiatives, which would ensure a shortcut from Western Europe to East Asia,” Volodin noted.

During a Moscow summit in May 2015, Presidents Vladimir Putin and Xi Jinping reached an agreement on integration between the New Silk Road and the Eurasian Economic Union (EEU) with an eye to establishing multilateral cooperation between the EEU, the Shanghai Cooperation Organization (SCO) and the Association of Southeast Asian Nations (ASEAN).

In an interview with Sputnik China, Alexander Lomanov, an expert at the Institute of the Far East in Moscow, said that even though One Belt, One Road is essentially a Chinese project, Russia’s participation could set the stage for integrating these three major regional projects into a common economic area without restrictive barriers and where the participating nations will play by the same rules.

He added that the EU could use its financial and scientific potential and extensive administrative expertise to become a driving force behind this project, but it refuses to cooperate directly with the Eurasian Economic Union and China for ideological reason.

“This means that the West is losing its role as a driving force behind major-scale integration projects,” Alexander Lomanov concluded.

Speaking at the opening ceremony of the Belt and Road Investment Forum in Beijing on Sunday, President Putin said that nearly 50 European, Asian and Latin American countries were interested in participating in the One Belt One Road project.

Jia Pujing, an expert at People’s University in China, underscored the mutually-rewarding cooperation between the EEU and China on the One Belt One Road project.

“The One belt One Road and the EEU are all about economic cooperation and long-term development in Eurasia, unfettered trade ties, highly developed transport links and friendship,” Jia Pujing said.

Yekaterina Arapova, an expert at Moscow’s Institute of International Relations, believes that by expanding its investment partnerships China is able to “invest in potentially lucrative projects and engage in the export of technologies and labor into major infrastructure projects.”

© AP Photo / Andy Wong
N Korean Delegation to Take Part in Beijing Silk Road Forum – Chinese Foreign Ministry
“The introduction of labor-saving technologies and robots will eventually make many low- and intermediately-qualified Chinese workers redundant. Realizing this, China needs large-scale projects, including trans-regional ones, to get all these potentially jobless people back to work. That’s why I’m sure that the Russian idea of a major Eurasian partnership will be very beneficial to China,” Arapova emphasized.

In Beijing, Vladimir Putin said that in order to deepen integration processes in Eurasia it is necessary to liberalize trade rules, unify regulatory norms for all kinds of products and create new transportation corridors and infrastructure capabilities.

Alexander Gabuyev, chief of Russia in the Asia-Pacific Region program at Carnegie Moscow Center, welcomes the start of the talks between the Eurasian Economic Commission and China on facilitating bilateral trade.

“First off, we need to remove trade barriers and then we can talk about lowering import tariffs. This done, we could start increasing our trade turnover and get rid of problems that prevent us from making a economic leap forward,” Gabuyev said.

The New Silk Road forum, which opened in Beijing on May 14, is part of the Chinese government’s effort to push forward the One Belt One Road initiative, including the Silk Road Economic Belt and Maritime Silk Road, proposed by President Xi Jinping in September 2013.