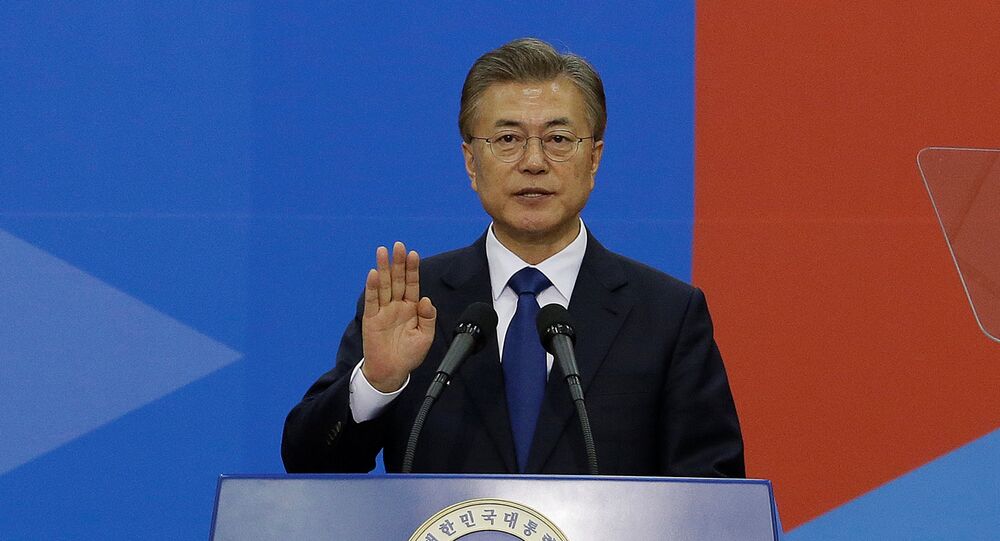 Newly elected South Korean President Moon Jae-in, who was sworn in on Wednesday, has made his first speech as president. He vowed to tackle a number of issues, including the easing of tensions between the US and China over the US' missile defense system. However, Professor Kim Jeong told Sputnik why this issue is unlikely to be resolved soon.

Sputnik Korea discussed the issue with Kim Jeong, professor at the Seoul-based University of North Korean Studies, who explained why we should not expect a solution to this issue any time soon.

He said that South Korean society remains split over the deployment of the THAAD system and the newly elected leader will be inevitably forced to take sides.

For now, however, it is hard for him to publicly outline his stance on the issue, as there is no data on how the public opinion stands on it after the recent presidential elections. Therefore he risks losing political capital by potentially choosing the wrong side and may be forced to swap camps during future talks with the parties to the conflict, he said.

Back in 2015, the two countries agreed to settle the issue of "comfort women" forced to work in Japanese brothels during World War Two,

It is estimated that up to 200,000 women were forced to be sex slaves for Japanese soldiers during WW2, many of them Korean. Other women came from China, the Philippines, Indonesia and Taiwan.

Japan had apologized and agreed to pay 1 billion yen ($8.8 million) — the amount South Korea asked for — to go towards the victims.

The issue has been the key reason for strained ties with South Korea demanded stronger apologies and compensation.

Professor Kim noted that even though 80-90 percent of South Koreans support the renewal of negotiations on the issue, it would be hard for Moon Jae-in to initiate talks in the nearest future without the consent of Japan.

© REUTERS / U.S. Department of Defense, Missile Defense Agency/Handout
North Korea Taunts Seoul With ‘Satellite Photos’ of THAAD
Professor Kim noted that the South Korean stance regarding the sanctions on Pyongyang in general coincides with that of the US, there are still certain differences which the two countries have to bridge.

In his column on the website of the university, Professor Kim writes that even though the voters still have high expectations over the election of Moon Jae-in, there is a huge gap between these expectations and reality. The newly elected president, who represents the minority in the country's parliament, will be forced to form political coalitions to be able to implement his internal and foreign policies.

The voters meanwhile should lower their expectations, as their president is facing a hard task forming a political coalition, unprecedented for the Korean politics.