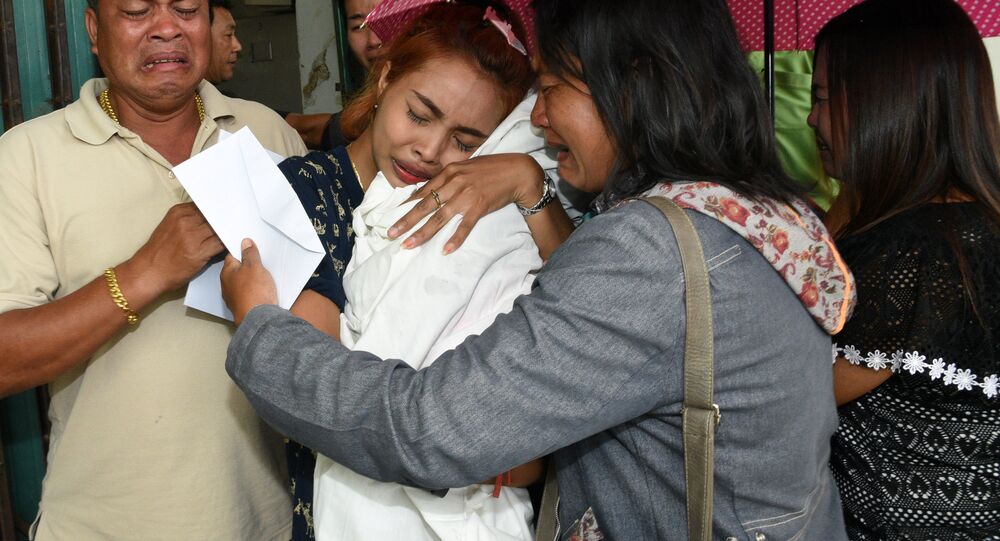 A man in Phuket, Thailand, filmed himself murdering his eleven-month-old daughter before committing suicide himself, and livestreamed the grisly deed to the public via Facebook.

The child's mother, Jiranuch Trirat, alerted the police, who rushed to the scene. "They had already died when I arrived there," first responder Lt. Jullaus Suvannin told AFP.

The perpetrator of the crime was Jiranuch's boyfriend, 20-year-old Wuttisan Wongtalay. The four-minute video showed him tying a noose around the neck of his infant daughter, Beta, and hanging her off the roof of the building.

Thai news outlets broadcast footage of Trirat collecting her daughter's body and the body of Wuttisan from the hospital. Police say that Wuttisan had earlier argued with Jiranuch, as she had recently left him for another man.

"At 3:00 a.m. yesterday he checked my phone and threatened to kill me," said Jiranuch. "I was very afraid and ran away from the house and left Beta with him."

"I returned home late in the afternoon and they were not there. I called him to bring Beta back to the house, but I could not get in touch with him. That's when I saw the video clip and called the police," she said.

"In the video, Wuttisan showed a bottle of liquid, which we later confirmed was kratom drink [kratom leaves are used in Thai folk medicine as both a stimulant and, at higher doses, as a sedative]. He gives the baby, 'Beta,' a drink and has a drink too. After that he ties a rope around the girl's neck and lowers her down."

"You can hear the girl crying and finally the crying stops. Then he pulls her up onto the rooftop and unties the rope from her neck," he said. Wuttisan did not film his own suicide.

The video was available on Facebook for just under 24 hours before it was taken down. It was the first murder in Thailand to be broadcast on social media, said deputy police spokesman Kissana Phathanacharoen. "It could be influenced by behaviour from abroad, most recently in Cleveland," Kissana told Reuters.

This gruesome crime follows a speech from Facebook CEO Mark Zuckerberg on Wednesday, April 18, in which he addressed the sharing of another murder over Facebook: that of Robert Godwin, Sr., a Cleveland retiree who was shot dead by Steve Stephens. Stephens later committed suicide while being pursued by the police.

"We're also going to work on getting more common ground; not just getting more opinions out there, but also helping to bring people closer together. We have a lot to do here. We have a full roadmap of products to help build groups and community, help build a more informed society, and help keep our community safe," Zuckerberg said in regards to the incident during Facebook's annual F8 conference.

"We have a lot more to do here. We're reminded of this this week by the tragedy in Cleveland. Our hearts go out to the family and friends of Robert Godwin, Sr., and we have a lot of work and we'll keep doing all we can to keep tragedies like this from happening."

Revelation by 2ch Hacker: LiveStream From Brothel or How to Troll a Hooker