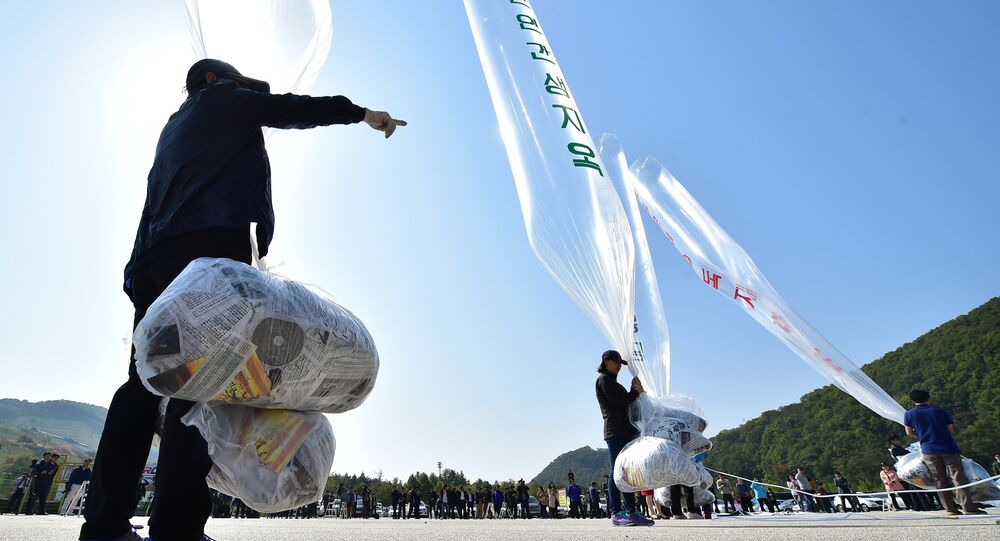 A group of North Korean defectors launched thousands of propaganda leaflets toward the North Korean border on Kim Il-sung’s 105th anniversary, a major holiday in the country.

© AFP 2021 / KIM JAE-HWAN
'Missile Blew Up Almost Immediately': US Military Confirms DPRK's Failed Test Launch
Some 300,000 leaflets were sent by a group of North Korea defectors from an elevated point on a mountain just west of Seoul, during the anniversary celebration of Kim Il-sung, the founder of modern North Korea.

Other balloons carried large portraits of North Korea's incumbent leader Kim Jong-un and his late half brother Kim Jong-nam, with the words "murderer" and "victim" written over their heads, respectively. The placards accused the North Korean leader of directing the assassination of his half-brother in Malaysia's Kuala Lumpur International Airport in February.

"We condemn dictator Kim Jong-un for persistently threatening the Republic of Korea [South Korea] and the global society with nuclear weapons and missiles and murdering his half brother," group leader Park Sang-hak told reporters.

The psychological war between the two Koreas officially ended in 2004, when the two sides agreed to cease propaganda activities. Despite that, both sides have found ways to continue their propaganda efforts over the ensuing decade.