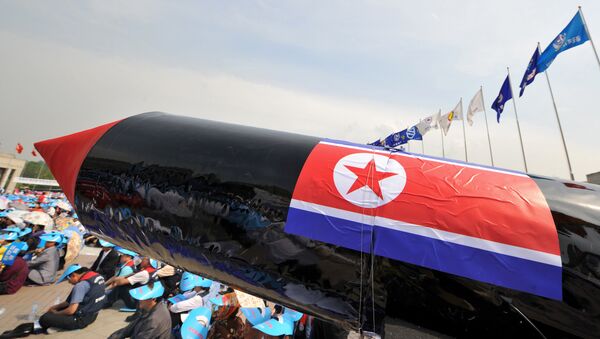 Pyongyang attempted to launch an unidentified projectile on Sunday, but appears to have failed, the Yonhap news agency reported citing the South Korea's military.

South Korea's Joint Chiefs of Staff (JCS) stated that the attempted launch was conducted from the area near North Korea's eastern port city of Sinpo, but likely ended in a failure.

"North Korea attempted to launch an unidentified missile this morning in Sinpo district of the Hamgyong-namdo province, but the test appears to have failed," the Joint Chiefs of Staff said.

US Pacific Command issued a statement saying they detected what they believed was a North Korean missile launch, which occurred at 11:21 am Hawaii time on April 15. The military said the missile "blew up almost immediately," adding that its type is yet to be identified.

The failed test was conducted as US Vice President Mike Pence was expected to arrive in Seoul to celebrate Easter with the American military contingent deployed there.

US President Donald Trump pledged on Thursday to "take care of" the North Korean "problem."