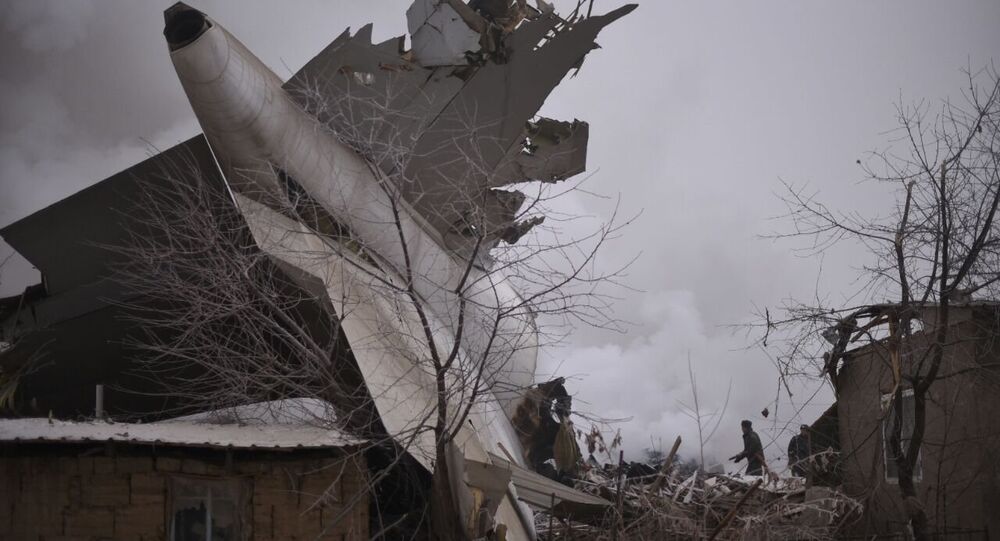 A Turkish cargo jet, operated by ACT Airlines, crashed while en route from Hong Kong to Istanbul Monday into homes near Manas airport close to the Kyrgyz capital, Bishkek, where it was supposed to make a stopover.

© Sputnik / Tabyldy Kadyrbekov
Up to 31 Bodies, 9 Body Parts Found at Turkish Plane Crash Site in Bishkek (PHOTO, VIDEO)
MOSCOW (Sputnik) — Up to 37 people were killed in the crash, the Kyrgyz Ministry of Emergency Situations said, with at least 31 bodies and nine body parts have been uncovered at the crash site.

At the same time, nine injured people, including six children with serious burns, are now in Bishkek hospitals. According to the country’s Health Ministry, the death toll from the tragedy is likely to further increase as rescue works at the crash site continue.

Reasons for the Crash Unclear

The landing of the plane was delayed, according to a representative of Manas airport press service.

“There is still no information on reasons of the plane crash.  I can only say that the aircraft was supposed to land later than scheduled,” the representative told RIA Novosti.

She refused to comment on the information that the plane was unable to land at the first attempt and tried to perform a second attempt at landing.

© Sputnik / Tabyldy Kadyrbekov
Kyrgyzstan’s Prosecutors Open Criminal Probe Into Turkish Cargo Jet Crash
In turn, an ACT Airlines official told RIA Novosti in Ankara that the causes of the crash have not yet been established.

“We are waiting for an official invitation [from the Kyrgyz authorities], we will form an investigation commission as soon as we get it,” a representative of the committee told RIA Novosti.

The visibility at the moment of landing was poor but “acceptable,” Abulgaziev told journalists as the tragedy was reportedly blamed on a dense fog.

“It [the aircraft] was supposed to refuel in Bishkek. Approximately at 7:07 a.m. (01:07 GMT) it requested permission for landing. Weather conditions allowed [the landing], a passenger plane landed before it, 11 other aircraft, both passenger and cargo [planes], landed at night,” the deputy prime minister said.

He noted that, according to a suggestion of experts, the plane crew made a mistake when landing by misjudging the distance.

Russian President Vladimir Putin expressed condolences to the president of Kyrgyzstan in connection with the deadly plane crash.

“Russian President Vladimir Putin expressed his condolences to Kyrgyzstan’s President Almazbek Atambayev in connection with numerous human casualties caused by the plane crash on houses near Bishkek. The Russian leader underlined in the forwarded telegram that Russia shares the pain and sorrow of the friendly people of Kyrgyzstan,” the Kremlin press service said.

A government source told RIA Novosti the Kyrgyz president was about to sign a decree announcing a national day of mourning on Tuesday. The state KTRK television channel has cancelled all entertainment programs to pay tribute to those who lost their lives.