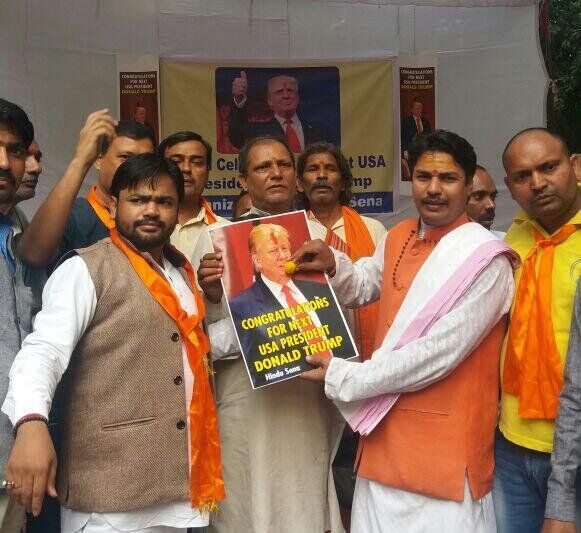 After six months of performing a holy Hindu ritual invoking God's help, an Indian right wing group believes that its prayers have been answered and destiny now favors Trump. In fact, the group has already started celebrating Trump’s win which they believe is essential to end Islamic terrorism.

New Delhi (Sputnik) — Like US presidential candidate Donald Trump, fringe Hindu organization Sena in India also seems to believe there is no point in counting the votes on November 8.

The Hindu Sena has already performed Trump’s coronation ceremony with its members holding up dozens of posters bearing the slogans “India Loves Trump” and “I Love Hindus.” The Sena believe that Donald Trump is the savior who will wipe out Islamic terrorists from the world.

"Trump's victory is confirmed early, due to his thoughts against Islamic terrorism and love for India and Hindus," said Vishnu Gupta, Hindu Sena national president.

This was the cue for the Sena to ask the Indian diaspora in the US to opt for Trump over Hillary Clinton. The Sena had earlier torched posters of Democratic presidential nominee Hillary Clinton on October 18.

The Hindu Sena was founded by Vishnu Gupta in 2011. The organization came into the spotlight when its members publicly slapped an alleged supporter of the terrorist organization Lashkar-e-Taiba.

Trump 'Would Not Be Permitted to Win' US Presidential Election - Assange