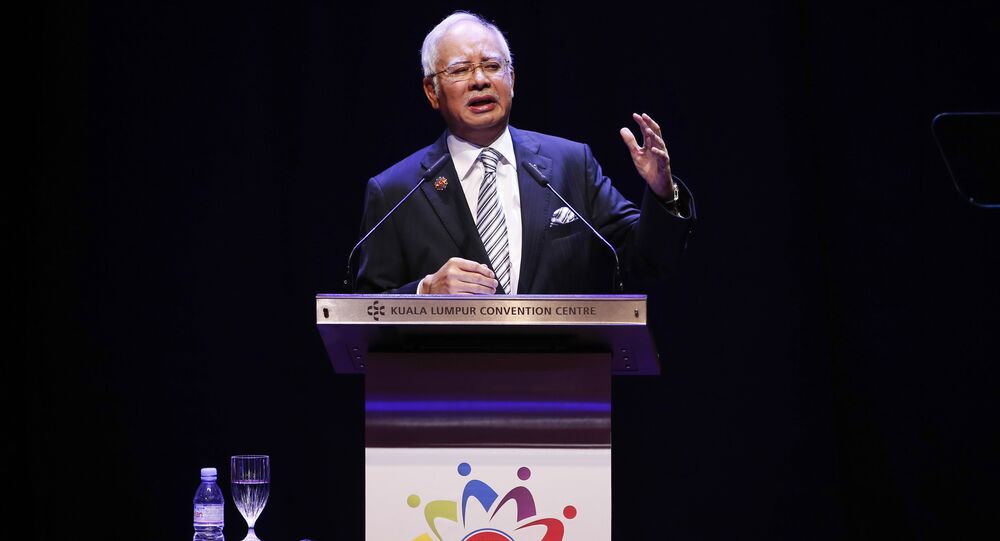 Malaysian Prime Minister Najib Razak’s week-long visit to China will start October 31. Will it mark a turning point for Malaysian foreign policy, similar to the one recently made by President of the Philippines Rodrigo Duterte?

© REUTERS / Ng Han Guan/Pool
Chinese-Philippine Cooperation is a 'Signal of Beijing Outperforming US in the Asia-Pacific'
US policy in the South China Sea received a powerful blow during Duterte's momentous visit to Beijing, when he officially announced his country's "separation" from the US and "realignment" in China's "ideological flow." This brash statement has been supplemented by 13 agreements worth $13.5 million, which encompassed a wide variety of spheres of cooperation.

Tomorrow, Beijing will accept another important visitor: Malaysian Prime Minister Najib Razak, who will stay in the Middle Kingdom's capital for a whole week, along with a several dozen government leaders and business people.

"We will be signing many new agreements and understandings that will elevate the relationship between our two nations to even greater heights," the media quotes the prime minister as saying earlier this week.

It is believed that one of the points of discussion will be a major littoral ship deal between the two countries. Earlier this week, the following information was posted on the official Facebook account of the Malaysian Ministry of Defense:

"On November 5, 2016, the Defense Ministry will sign a contract for the procurement of Littoral Mission Ships (LMS) with SASTIND (the State Administration for Science, Technology and Industry for National Defense), which is an important part of the schedule during the Prime Minister's official visit to China."

© AP Photo / Wong Maye-E
‘Peace Treaty’ on the Horizon? North Korea, Ex-US Officials Huddle in Malaysia
The post was deleted when Reuters journalists tried to contact the ministry for comments.

A spokesperson for China's Foreign Ministry has responded to the "leak" by saying that China and Malaysia are continuing to "cooperate and communicate regularly across all spheres," but did not provide any further details, according to Reuters.

According to Lam Choong Wah, senior fellow at Research for Social Advancement (REFSA), a Malaysia research institute, Malaysia might purchase 10 littoral mission ships, each costing about $7 million, according to the South China Morning Post.

"The truth is we could have bought these from a number of countries," Lam noted, explaining that China was chosen because of its earlier support for Malaysia during the so-called 1MDB financial scandal that threatened the national currency.

© East News / Imago Sport and News
Malaysia Airlines’ Missing Plane Should Never Have Flown, New Book Claims
A mere month ago, Malaysia was among those countries pushing back against Beijing's claims on disputed South China Sea areas. Purchasing littoral mission ships from China at this very moment, "sends a… signal of pulling back from the US and outreach to China," says Euan Graham, director of the international security programme at the Sydney-based Lowy Institute, according to the Chinese news outlet.

Both the Philippines and Malaysia are members of the Association of Southeast Asian Nations (ASEAN) which tried to create a combined front to counter Chinese claims over South China Sea. Another member of this association is Vietnam, who also opposes China in the sea dispute, but allowed a Chinese naval fleet to enter its port of Cam Rahn for a visit during which the military personnel of the two countries participated in various activities.

Thus, even if Najib Razak won't be as fierce in his rhetoric as Duterte, the overall impression from the latest developments suggest the US influence in the region is deteriorating.

UK Provides Malaysia With Over $1 Mln to Support Development Projects