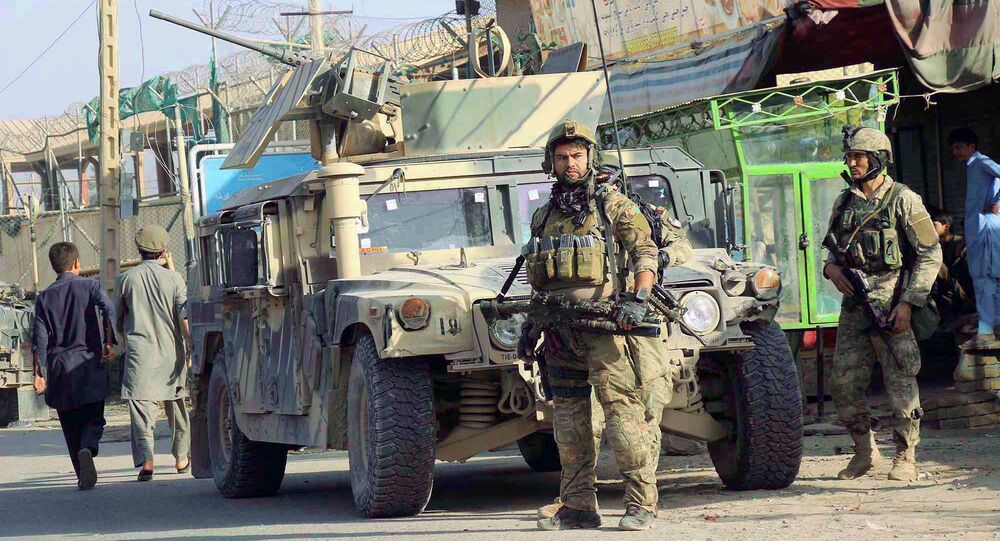 The anti-terrorist operation in Kunduz revealed the readiness of locals to side with the authorities, an "encouraging factor" that makes authorities optimistic about the fight against terrorism in Afghanistan, Sadeq Sadeqi, spokesman for the Afghan Interior Ministry, told Sputnik Dari.

© AP Photo / Mirwais Khan, File
Afghanistan Taliban Opens New Propaganda Offensive Against Kabul
In an interview with Sputnik Dari, Afghan Interior Ministry spokesman Sadeq Sadeqi said that the anti-terrorist operation in Kunduz showed that locals are on the side of the authorities, something that may add significantly to combating terrorism in Afghanistan.

The interview came a few days after the Taliban tried to seize the city of Kunduz in northern Afghanistan, but sustained heavy losses and retreated.

He recalled that the Afghan special forces held a mopping-up operation in Kunduz in recent days to drive Taliban militants out of the city.

© AP Photo / Najim Rahim
An Afghan National Army soldier, left, shouts against the Taliban, after firing a rocket towards Taliban positions, on the outskirts of Kunduz, northern Afghanistan (File)

According to him, "soldiers are carrying out the tasks with a maximum degree of professionalism".

"I want to note that the operation is fully supported by the locals and the country's civilian population on the whole. This factor is encouraging when it comes to the prospects for the fight against terrorism on Afghan territory," he said.

He added that there are no logistical problems pertaining to the special forces who he said get reinforcements when necessary.

"Also we provide support for the civilian population. All this activity is carried out in a planned manner, and there are no obstacles to it," he said.

On Monday, Taliban militants launched an offensive and managed to capture several areas in Kunduz, with local media reporting that the militants took control of the National Security Directorate building and headed towards the governor's administration office.

On Tuesday, media reports said that the center of Kunduz had been freed from the Taliban and that more than two dozens of militants had been killed in clashes with the Afghan security forces.

© Photo : media.msf.org/Victor J. Blue
One Year On: US Bombing of MSF Hospital in Kunduz Remembered
Speaking to Sputnik Dari, Afghan Defense Ministry Dowlat Vaziri said that "during the last two days, Taliban militants were not able to seize a single army checkpoint in Kunduz," and that "the militants were kicked out of the city."

The security situation in Afghanistan deteriorated after the Taliban seized vast rural areas in this South Asian country and launched an offensive on major cities. The presence of the terrorist group Daesh has also significantly grown in Afghanistan in the past few years.

Kunduz is the most important administrative, military and strategic center in northern Afghanistan. In 2015, the city was seized by Taliban militants but was soon afterwards liberated by the Afghan military.