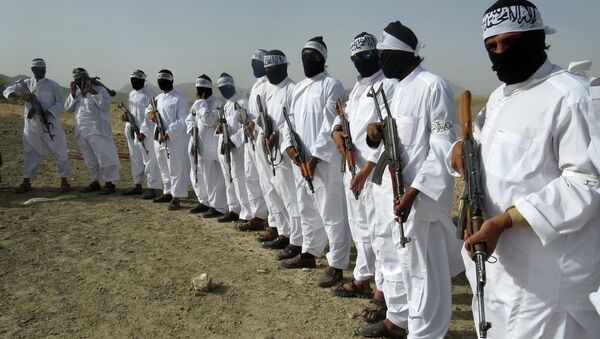 © AP Photo / Mirwais Khan, File
Subscribe
As the Afghan government continues to battle against the encroaching Taliban insurgency along with various terrorist groups seeking to gain a foothold in the country, it appears that Kabul’s enemies have now resorted to psychological warfare tactics.

People With Scars: Victims of War in Afghanistan Call for Peace
Apparently unable to defeat the Afghan government with conventional tactics alone, Taliban and terrorist groups operating in the country now try to sway the hearts and minds of the local population in their favor, seeking to drive a wedge between civilians and security forces.

"During this time of celebration, certain circles of the Afghan society keep aiding the cause of our enemies, the terrorist groups, paying no heed to the interests of their people and to the national reconciliation. These people seek to gain glory and prosperity for themselves by talking about the resurgent terrorist threat in the country and the incompetent authorities’ inability to protect their nation. In doing so, they provide the militants with the ability to wage full-scale psychological warfare against the people of Afghanistan," he explained.

The Second Vice President also said that the spread of anti-government propaganda in many of the country’s provinces is becoming more and more intensive, and that the Taliban even established special units dedicated to using these tactics.

"They manipulate facts and falsely accuse security forces of slaughtering civilians during anti-terrorist operations. They’re casting a shadow on Afghan security forces that fight against terrorism, and try to pit the people against them. There’s a propaganda campaign being waged in social media and in mass media against the people and the government. Those who wage it claim they belong to the people, but that’s simply not true. They serve the enemy, not the people. The ones who serve the people are our government, protecting their interests and fighting against terrorism, and officers and soldiers of the Afghan army who always stand ready to protect the civilians," Danish said.

He ruefully added that years of hostilities have reaped a terrible toll on the people of Afghanistan as the authorities continue to unearth mass burial sites across the country.

"During the last 15 years alone we’ve discovered over 20 mass graves in various provinces, with thousands of civilians interred in each of these sites," Danish said.