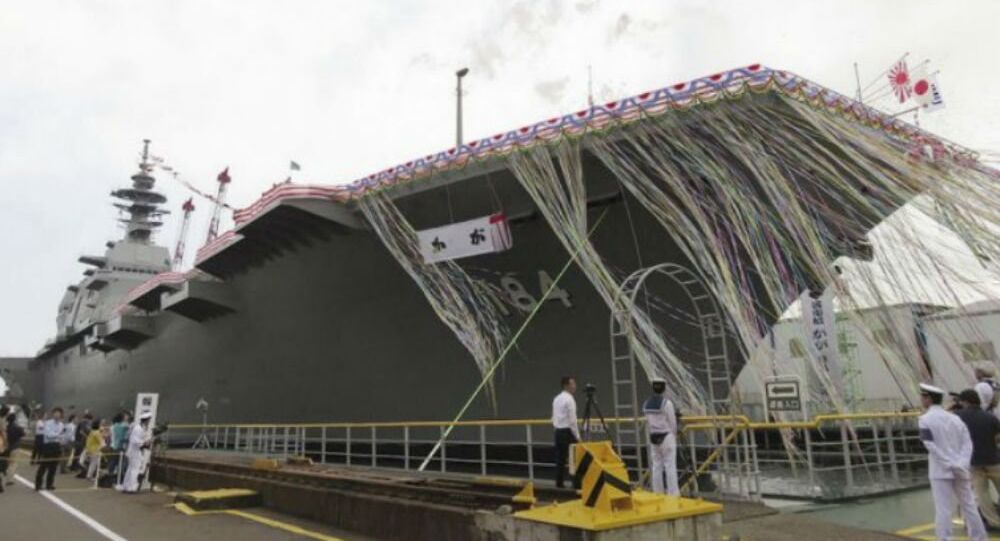 Japan launched the second and final ship in its new Izumo-class helicopter carrier – the largest Japanese ships since World War II – at the Japan Marine United shipyard in Yokohama on Thursday.

The 24,000-ton ship, named Kaga – after the WWII aircraft carrier that took part in the Pearl Harbor attacks and was sunk at the Battle of Midway – is due to be commissioned in March 2017.

Kaga follows fellow classmate carrier Izumo, which was launched in August 2013 and commissioned into the Japanese Maritime Self Defense Force (JMSDF) in March.

The Japanese have said the primary role of the two ships are peaceful purposes, including humanitarian aid and disaster relief operations.

Regional neighbors and rivals have questioned the ship's merit as a purely defensive vessel. They say, due to its size and deck configuration, it could serve as an aircraft carrier – which are considered offensive weapons and banned under Japan's constitution.

Japan's defense ministry, however, has denied that the JMSDF intends to use the Izumo-class for fixed-wing aircraft or for waging war.

Kaga can host seven anti-submarine patrol helicopters, which will help in the detection of sophisticated Chinese submarines. Japan, along with other countries in the region, is engaged in territorial disputes with China in the South China Sea.

© AP Photo / Bullit Marquez
US Can’t Afford to Lose Asia, as Washington’s Security Depends on it

The Izumo-class ships "heighten our ability to deal with Chinese submarines that have become more difficult to detect," a JMSDF officer told Japanese newspaper Asahi Shimbum in March.

The ships will field seven Mitsubishi-built SH-60k ASW helicopters and seven AgustaWestland MCM-101 mine countermeasure helicopters, according to the US Naval Institute's Combat Fleets of the World.