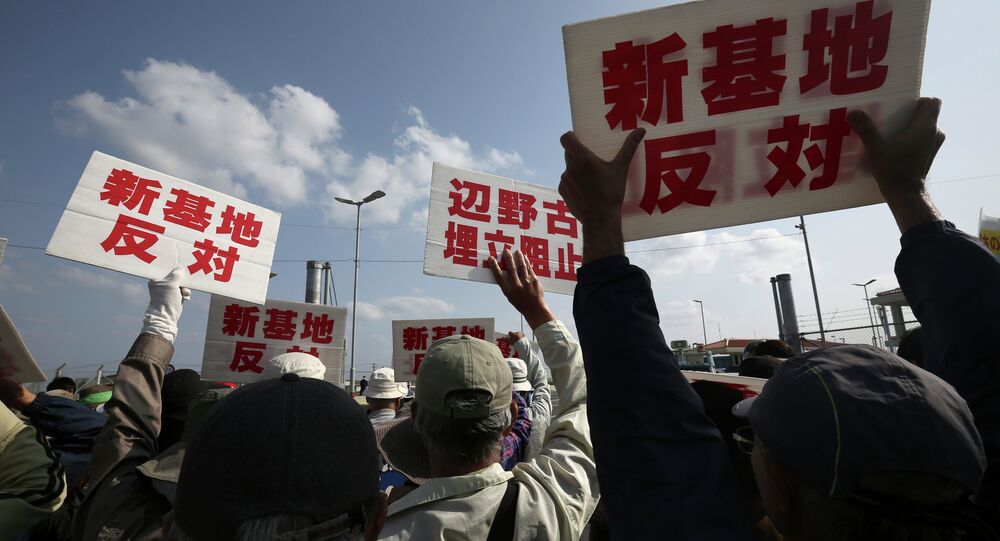 US plans to relocate the Futenma Air Station within Okinawa island from the city of Ginowan to the less populated Henoko coastal area in Nago city met residents' opposition. The relocation would require creating an artificial landmass and endangers nature. Shinzo Abe is expected to convey the message to Barack Obama.

© AFP 2020 / Toru YAMANAKA
Carter's Visit to Japan Overshadowed by Military Base Row
TOKYO (Sputnik) — Japan's Okinawan governor Takeshi Onaga on Friday asked Prime Minister Shinzo Abe to stop the relocation of a US military base within the prefecture and convey to the US president the Okinawan people's opposition over the plan, local media reported.

“I requested for him to convey to U.S. President [Barack] Obama that people in the prefecture oppose the relocation,” Onaga commenting on his first ever meeting with Abe, as quoted by The Japan News media outlet.

The talks come just a month ahead of Japanese prime minister's meeting with Obama scheduled on April 28 in Washington.

© REUTERS / Kyodo
Okinawa Population Grows More Angry Over US Military Base in Region
In 2006, Tokyo and Washington formally agreed to relocate the Futenma Air Station within Okinawa island from the city of Ginowan to the less populated Henoko coastal area in Nago city.

Relocating the station requires creating an artificial landmass of nearly 160 hectares (0.62 square miles) in coastal waters. The construction of the station and two landing strips, each 1.8 kilometers long (1.1 miles), is expected to take nine years.

© AFP 2020 / Toru YAMANAKA
Japan's Okinawa Requests to Shut Down US Marine Base Construction
The plans to relocate the US base to Nago attracted media attention in recent months and rallies were staged by local environmentalists arguing that the construction and maintenance of the base would harm flora and fauna in the area. Protests were also lodged by civic groups critical of the culture surrounding any US military presence on foreign soil.

Okinawa's current leadership advocates the relocation of the Marine Corps Air Station from Ginowan away from the country altogether.

Japan Gives Nod to New US Base in Okinawa

Japan, US Defense Chiefs to Meet Amid Tension Over US Military Base