A Chinese Ministry of Defense publication slammed the idea of Chinese naval hegemony as rumors about the construction of a second aircraft carrier have leaked to Taiwanese and American websites.

"I think if we need carriers, the more the better. The key is how much funding do we have."

© AP Photo / Xinhua/Wu Dengfeng
Leaked Reports on China Building Second Aircraft Carrier Taken Off Websites
Chinese officials have not commented on the announcement, although there have been reports that a high wall has been built around the Dalian shipyard and that China has been developing a new catapult for launching airplanes from carriers.

On Wednesday, China's official military publication rebutted China's plans for naval hegemony, commenting on an article by the National Interest magazine, one of the outlets which initially leaked news about plans for a second carrier. Chinese military analyst Teng Jianqun told the publication:

"We are not in long-term confrontation or combat with a certain country in the ocean. This assumption is a remote one. The main mission of the Chinese navy is to protect China's overseas interests and take on international obligations such as providing escort for merchant ships in the Gulf of Aden." 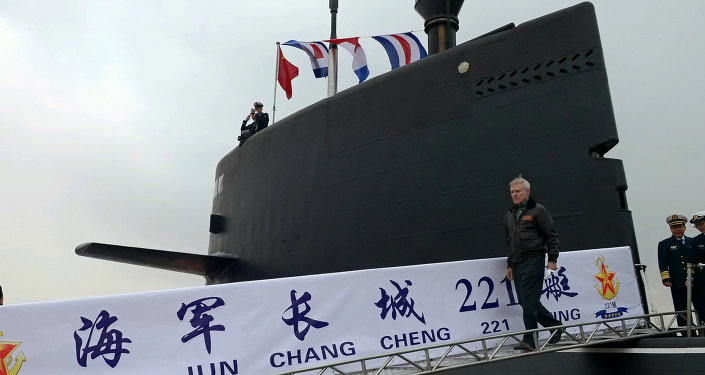 © Flickr / US Navy Page
Chinese Naval Fleet Now Outnumbers US Combat Vessels
It is not clear if the announcement is meant as a rebuttal of rumors about a second carrier or a justification of its construction, although the choice of responding to the first American publication to publish the rumor appears symbolic.

In addition, China has begun building an airbase in the on the disputed Fiery Cross Reef, which is also claimed by Taiwan, Vietnam and the Philippines, Chinese media announced on Wednesday. The island, which is part of the Spratly Islands in the South China Sea, has been grown in area through hydraulic filling. China is the only country of those laying claim to the islands which does not have an airbase in the area.