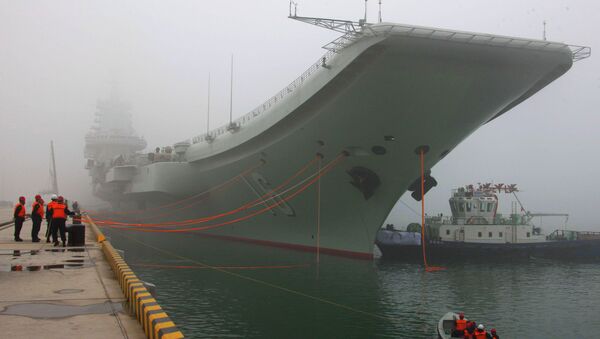 © AP Photo / Xinhua/Wu Dengfeng
Subscribe
International
India
Africa
Reports that China is set to construct a second aircraft carrier, which were leaked online on Saturday, have been carefully removed from all websites where it was mentioned.

World
China Dismisses Allegations of US F-35 Stealth Fighter Data Theft
MOSCOW, February 2 (Sputnik) — News that China is building its second aircraft carrier, which appeared on the internet over the weekend, have been carefully removed.

The message that the Chinese city of Changzhou is set to focus on promoting some major programs in 2015 and that Jiangsu Shangshang Cable Group is “winning the contract for China’s second aircraft carrier” appeared in the city government's microblog on Sina Weibo, a Twitter-like Chinese microblogging service this past weekend.

The message was posted by the Information Office of the Changzhou government at 9:07 am on Saturday, according to the English-language website of China Radio International.

The same piece of news was later published in the newspaper Changzhou Evening News on the same day.

The Communist Party secretary of Liaoning Province, Wang Min, also said that the country was already working on the second ship, which is to be completed around 2020, according to the website of Channel NewsAsia.

However, the country's authorities ordered that all reports of Wang's remarks be deleted, the website says.

China's first aircraft carrier, the Liaoning, was commissioned in September 2012. Originally christened the Riga, the Admiral Kuznetsov-class ship was designated as a multirole aircraft carrier for the Soviet Navy. The vessel was launched on December 4, 1988, and renamed Varyag in 1990.

China purchased the stripped hulk in 1998 from Ukraine and completely rebuilt the ship at Dalian Shipyard in northeastern China.

A Chinese defense ministry spokesperson has said that Liaoning may not be the only aircraft carrier China intends to have in its fleet.