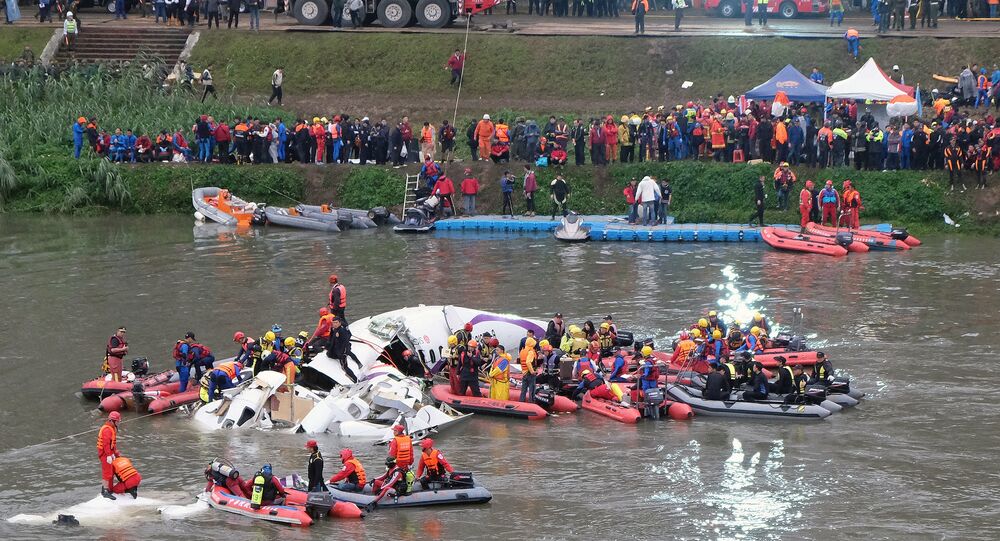 One of the TransAsia flight 235’s pilots sent a distress call several minutes before the crash saying the plane suffered an engine failure.

© REUTERS / Pichi Chuang
TransAsia Plane Carrying 58 on Board Crashes Into River in Taiwan, at Least 20 Dead (VIDEO)
One of the TransAsia flight 235’s pilots sent a distress call several minutes before the crash saying the plane suffered an engine failure, according to Taiwan's Civil Aviation Authority.

The pilot alerted the air traffic control to the issue. His last communication was "Mayday Mayday engine flameout," Reuters reports.

The ATR-72 aircraft with five crew members and 53 passengers was en route from Taiwan's capital Taipei to the island of Greater Kinmen when it crashed into the Keelung River shortly after takeoff Wednesday. Over 30 passengers were reportedly tourists from mainland China.

The death toll of the accident is now 23, according to fire department officials at the wreckage site cited by the Straits Times. According to the newspaper, 20 people remain missing, while 15 others are injured. The rescue operation is currently underway.

Many sources reporting that #TransAsia aircraft called mayday due to engine flameout.

TransAsia is a private airline based in Taipei. In 2014, 48 people were killed when another of the airline's ATR-72 planes crashed on the island city of Magong as it tried to land in difficult weather conditions.

TransAsia Plane Carrying 58 on Board Crashes Into River in Taiwan