TransAsia Plane Carrying 58 on Board Crashes Into River in Taiwan 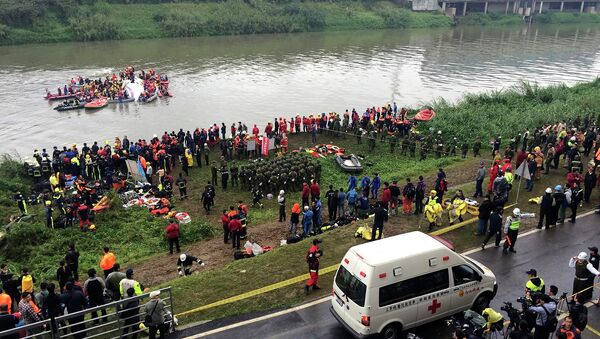 At least 20 people were killed when a TransAsia plane carrying more than 50 passengers crashed into a river in New Taipei City on Wednesday morning, local media reported.

Previously, it was reported that over 25 people were rescued from the plane’s wreckage, while the rest were unaccounted for. Authorities are trying to rescue the people still trapped inside the fuselage, Taiwan's Central News Agency reported.

An ATR 72-600 TransAsia Airways plane crash-landed after a take-off from Taiwan's Songshan airport in northern Taiwan. Five crew members and 53 passengers, including two children, were on board the flight, according to the news agency.

The ATR 72-600 turboprop plane was en-route to the offshore island of Kinmen, when it crashed into a river in New Taipei City after ramming into a highway viaduct. The accident occurred at 11:00 local time (03:00 GMT) a few minutes after the plane's takeoff.

There were 31 tourists from the mainland China on board, Taiwan’s tourism bureau said. The weather was clear when the plane took off.

As the plane crashed into the river, it hit a taxi, the driver of which was injured, AP says. Pictures from the scene also showed some damage to a bridge near the river, with small pieces of the plane scattered on the road.

TransAsia is a private airline based in Taipei. In 2014, 48 people were killed when another of the airline’s ATR-72 planes crashed as it tried to land under difficult weather conditions on the island city of Magong.

The incident is the latest in a row of misfortune to hit Asian carriers over the last year. An AirAsia plane flying from the Indonesian city of Surabaya to Singapore crashed on December 28, 2014, killing all 162 people on board. Another plane, Malaysia Airlines flight MH370 en route from Kuala Lumpur to Beijing went missing on March 8, 2014 with 227 passengers and 12 members of the crew. The plane allegedly disappeared in the area of the southern Indian Ocean.