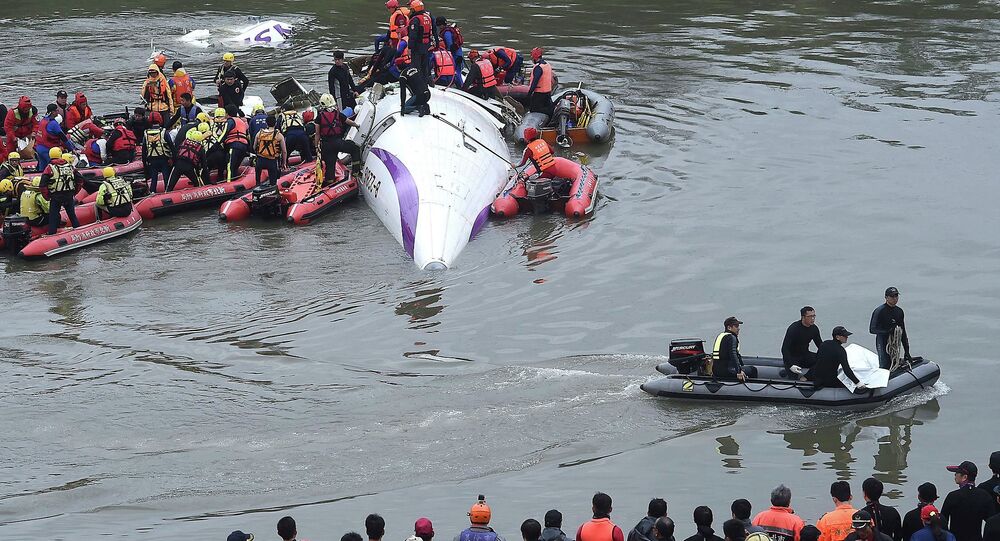 The plane crash took the lives of at least 20 people. Rescue teams are still attempting to free people trapped inside the fuselage.

© REUTERS / Pichi Chuang
TransAsia Plane Carrying 58 on Board Crashes Into River in Taiwan, at Least 20 Dead (VIDEO)
MOSCOW (Sputnik) – Rescuers have recovered the flight recorders of a TransAsia plane that crashed into a river in Taiwan's capital, Aviation Safety Council spokesman said Wednesday.

Investigators will begin reading the data from the black boxes Wednesday, Wang Hsing-chung said, during a press conference as quoted by the Straits Times.

At least 16 people have been killed, while another 16 are injured and 26 people are still unaccounted for in the plane crash, Taipei City Fire Department acting commissioner Wu Chun-hong said during the press conference as cited by the newspaper.

According to other media reports, the incident took lives of more than 20 people.

Rescue teams are still attempting to free people trapped inside the fuselage, according to local media.

The ATR-72 aircraft with five crew members and 53 passengers was en route from Taiwan's capital Taipei to the island of Greater Kinmen when it crashed into the Keelung River shortly after takeoff Wednesday. Over 30 passengers were reportedly tourists from mainland China.

TransAsia is a private airline based in Taipei. In 2014, 48 people were killed when another of the airline's ATR-72 planes crashed on the island city of Magong as it tried to land in difficult weather conditions.