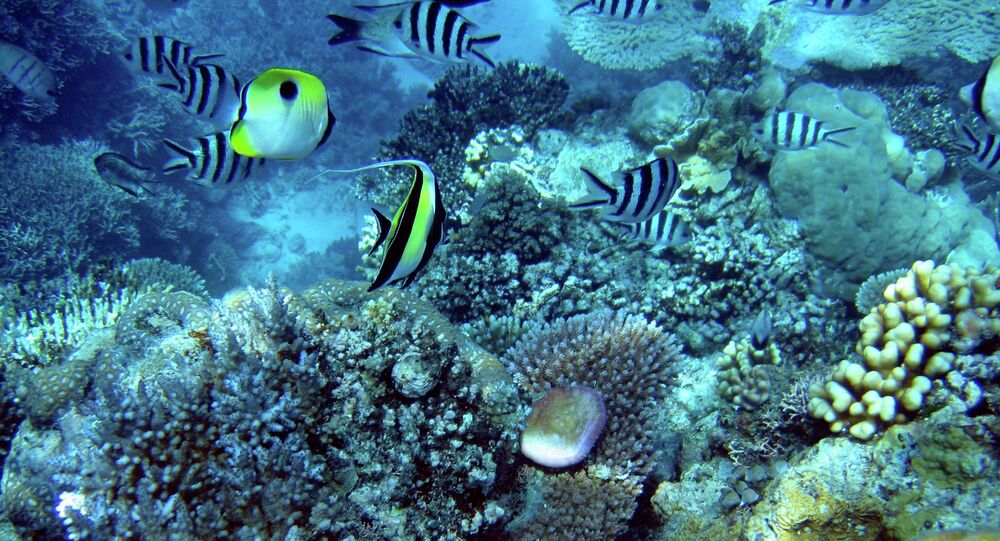 Among the many topics to be discussed by the World Heritage Committee in June will be whether the Great Barrier Reef should be included in the organization's list of endangered sites.

© AFP 2021 / FABRICE
Global Warming Trend to Continue After 2014 Marked Hottest Year on Record
MOSCOW, February 2 (Sputnik) — The Australian government is committed to preserving the Great Barrier Reef with "renewed vigor," the country’s environment minister said in a letter to UNESCO’s World Heritage Centre Monday, in response to a warning that the world's biggest reef system could be included on the list of endangered sites.

"We have heard the concerns of the World Heritage Committee, and we have acted with renewed vigour … Australia firmly believes that the property does not warrant inclusion on the List of World Heritage Properties in Danger," Greg Hunt said, in a letter to UNESCO, included in a report on the condition of the reef.

The World Heritage Committee will meet in Germany in June. Among the many topics to be discussed will be whether the reef should be included in the organization's list of endangered sites. In a previous meeting mid-2014, Australia was required to submit a progress report on the condition of the reef.

If added to the UNESCO 'in danger' list, it could have an adverse affect Australia's tourism industry as well as being seen as a national embarrassment.

Among UNESCO’s concerns were five major industrial ports which proposed disposing dredge detritus into the marine park in 2013. It also became apparent that the reef had lost half of its coral cover in the 27 years preceding 2012.

© Photo : SEFTIA
Rare and Terrifying Shark Caught in Australia
However, Hunt has assured that dredge disposal is "zero," heightened by his announcement in November 2014 that the practice would be permanently banned.

According to a report sent by Hunt to UNESCO, the Australian government will invest $2 billion over the next decade alongside "strong" legislation toward preserving the natural wonder, visited by over 2 million people annually.

The Australian branch of the World Wide Fund for Nature (WWF) has slammed the report, however, saying it does not provide an "accurate assessment" of the reef's state.

"The report portrays the Reef as remaining in good condition despite evidence from the government’s own scientists that it is suffering a serious decline in its health," the environment watchdog said, in a statement on Monday.

Australia's Great Barrier Reef can be seen from space and, as the largest structure on Earth made by living organisms, is the world's largest coral reef system and home to an enormous diversity of living things, according to UNESCO.