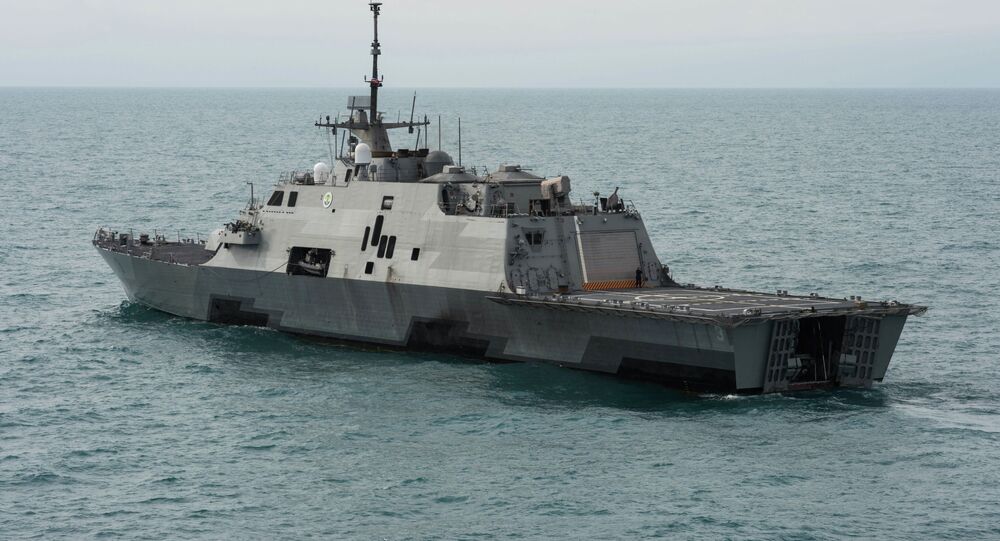 The Tow Fish sonar aboard the destroyer can identify objects on the seafloor as small as a golf ball, according to members of the US Navy team.

© REUTERS / U.S. Navy
Russia Assists Indonesia in Recovery of AirAsia Plane in Java Sea
WASHINGTON, January 9 (Sputnik) — Advanced sonar systems on the US Navy combat ship USS Fort Worth are providing high-resolution images of the seabed as the search for wreckage of AirAsia flight QZ8501 enters a second week, the US Navy said Friday.

"An eight-member team from Mobile Diving and Salvage Unit 1 onboard USS Fort Worth is supporting the ongoing Indonesian-led search effort for AirAsia flight QZ8501 with advanced Tow Fish side scan sonar systems capable of providing high-resolution images of the ocean floor," the US Navy said describing ongoing efforts to find clues into the fatal December 28 crash in the Java Sea.

The Tow Fish sonar can identify objects on the seafloor as small as a golf ball, a members of the US Navy team said. The advanced sonar has been used in past search operations including missing flight MH370 and the Korean ferry Sewol.

© AP Photo / Achmad Ibrahim
Fragment of Crashed AirAsia Plane Found With Two Bodies: Rescuer
The US Navy deployed on December 30 the USS Sampson to aid an international search operation. The USS Fort Worth joined on January 3, according to the US Navy. Both ships are supported by helicopters, small boats and divers to assist in the search for debris and passengers' remains.

Earlier this week the tail of AirAsia flight QZ8501 was found in the Java Sea.

AirAsia's Airbus A320-200, carrying 162 people on board, crashed into the Java Sea on December 28 flying from Surabaya, Indonesia to Singapore. The cause of the crash is unknown. Indonesian search and rescue teams supported by international partners including Russia continue to search for the plane wreckage and the plane's black box, which will give investigators insight into the fatal accident. Nearly two weeks since the crash, more than three dozen bodies of passengers have been found.