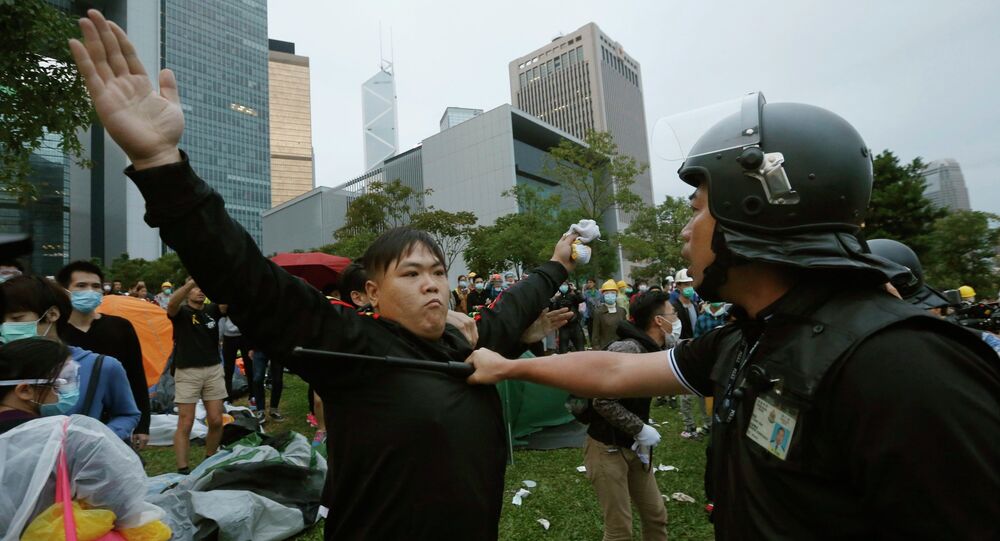 Police have refused to arrest three leaders of the Occupy Central movement, who spearheaded a civil disobedience campaign in Hong Kong. They turned themselves in earlier on Wednesday.

MOSCOW, December 3 (Sputnik) — Three leaders of the Occupy Central with Love and Peace movement, which along with several student organizations launched a civil disobedience campaign in Hong Kong, had turned themselves in, but were turned away by local police, the group said.

OCLP trio have entered Central Police Station where they will hand themselves in pic.twitter.com/cfbmTCcJmp

The leaders were allowed to leave the police station without restrictions, Benny Tai tweeted. They still had to mark offenses they had committed on a special list.

1/2 Benny Tai: we've been allowed to leave with no restrictions, not arrested. were presented with a special form pic.twitter.com/acpIiKZgqr

2/2 asked to tick from list of offences on custom form, including taking part in unauthorised assembly, incitement, criminal damage etc

BT — We still have to wait and see. We may still be arrested later and charged with more serious offence

© Fotobank.ru/Getty Images
Occupy Movement Leaders in Hong Kong Announce ‘Surrender’
The protests were sparked by Beijing’s decision to vet candidates who will participate in the election of Hong Kong’s fifth chief executive in 2017. The election will be first of its kind in Hong Kong's history. Back in 2007, Beijing and Hong Kong agreed that the election would be held in 2017. This August, Beijing, to some extent, broke its promise given in the past. Although the election is scheduled to take place as planned in 2017, Hong Kong will not be able to directly choose their chief executive, as all future candidates participating in the election will have to be approved by the central government's nominating committee, the BBC said.

Activists claim Beijing’s decision is an infringement on democracy. Hong Kong, which became part of China on July 1, 1997, is governed according to a "one country, two systems" principle, meaning the region enjoys wide autonomy in all areas except foreign affairs and defense.

As much as Hong Kong attempts to emphasize its difference from mainland China, pointing to its history as a former British territory, such an idea would have been hard to imagine under the British rule, as London had never provided any voting rights to Hong Kong, Forbes said.

The campaign has largely been peaceful and civilized, but has also exhibited several clashes between protesters and law enforcement officers. Riot police have on several occasions used tear gas to disperse activists.

© REUTERS / Tyrone Siu
China Bans Senior British MP From Hong Kong Amid Clashes With Protesters
This weekend saw some of the most detrimental violence in China’s semi-autonomous region since the protests started in late September. For instance, violent protesters threw water bottles, helmets and pepper powder at the police officers on Sunday, according to Xinhua. "They also used strong flashlights against police officers and attacked them with fire extinguisher spray," the news agency reported, adding that some activists "repeatedly provoked and verbally abused police officers and continuously incited others at the scene to charge the police cordon lines." 11 law enforcement officers were injured, 40 protesters were arrested.

By turning themselves in, Benny Tai, a law professor at the University of Hong Kong, Chan Kin-man, a professor of sociology at Chinese University, and Reverend Chu Yiu-ming have tried to halt this alarming trend. Despite their efforts, students and pro-democracy activists continue to occupy two protest sites and are unlikely to leave.