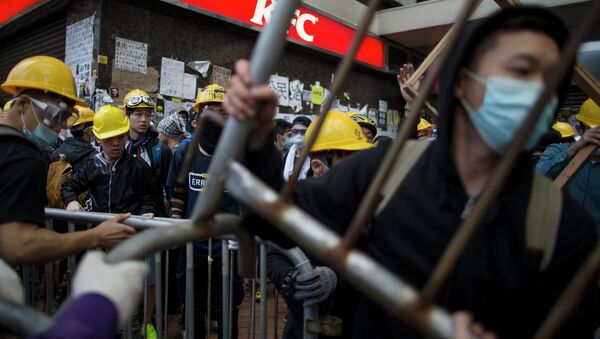 Beijing has warned a group of British MPs against interfering in China's domestic affairs, claiming it would deny their entry into Hong Kong. China's move came after the British Foreign Affairs Committee declared it was planning to meet with anti-government Occupy Central's protesters and the city's authorities in Hong Kong.

Hong Kong Government HQ Temporarily Closed as Protesters Clash With Police
MOSCOW, December 1 (Sputnik), Ekaterina Blinova — Beijing has warned a group of British Parliament members against meddling in China's internal affairs, claiming it would deny their entry into Hong Kong, after the British MPs declared they were going to meet with Hong Kong protesters and the city's authorities.

"The British MPs were due to arrive in Hong Kong later this month to meet with pro-democracy activists as well as the Hong Kong Government. This was part of its investigation into UK's relations with Hong Kong 30 years after the Joint Declaration was signed that handed the colony back to China," the Independent reported.

World
Over 90 Protesters Arrested in Mong Kok Since Early October
Richard Ottaway, Chairman of the Commons Foreign Affairs Committee, has criticized Beijing's decision, claiming the Chinese authorities were acting in an "overtly confrontational manner," and characterizing their move as a "very serious matter."

"Last week they told us it would be perceived we would be siding with the protesters who occupy central and other illegal activities. Then on Friday afternoon [November 28] the deputy ambassador came and told me we would not be allowed into Hong Kong. I told him they were making a mistake," said Mr. Ottaway, as quoted by the Independent.
Earlier this month another British diplomat in China was denied a visa to the mainland under the pretext of his "inacceptable" stance towards Hong Kong's anti-government protests.

World
Hong Kong Authorities to Investigate Alleged Police Beating
"It is not consistent with the positive trend in UK-China relations over the past year, including the recognition during Premier Li's visit to London in June that the UK and China have considerable shared interests in respect of Hong Kong," the UK's The Foreign Office said as cited by the Guardian.

On Sunday, November 30, thousands of Hong Kong rioters had again clashed with police, rejecting to withdraw the movement.

During the clashes "the violent radicals deliberately threw objects including water bottles, helmets and pepper powder at the police officers," Xinhua narrates, adding that the rioters also used "strong flashlights" against the police "and attacked them [police officers] with fire extinguisher spray." As a result of Sunday's standoff, eleven police officers have been injured and 40 protesters arrested.

We Will Force the Government to Regard Public Opinion: Hong Kong Activist
Both Xinhua and South China Morning Post, a Hong Kong media outlet, refer to a number of latest polls, which have indicated "that the majority of the people hope that the protesters would leave the occupied sites as soon as possible and cease the blockades of roads."

The New York Times notes that despite the fierce criticism of China from the British Foreign Affairs Committee, the UK's government is highly interested in preserving mutually beneficial relations with Beijing, seeking "to win more British business there, and more Chinese investment in Britain." In order to "further cement the relationship" British Prince William is planning to visit China's mainland next spring, the media outlet remarked.