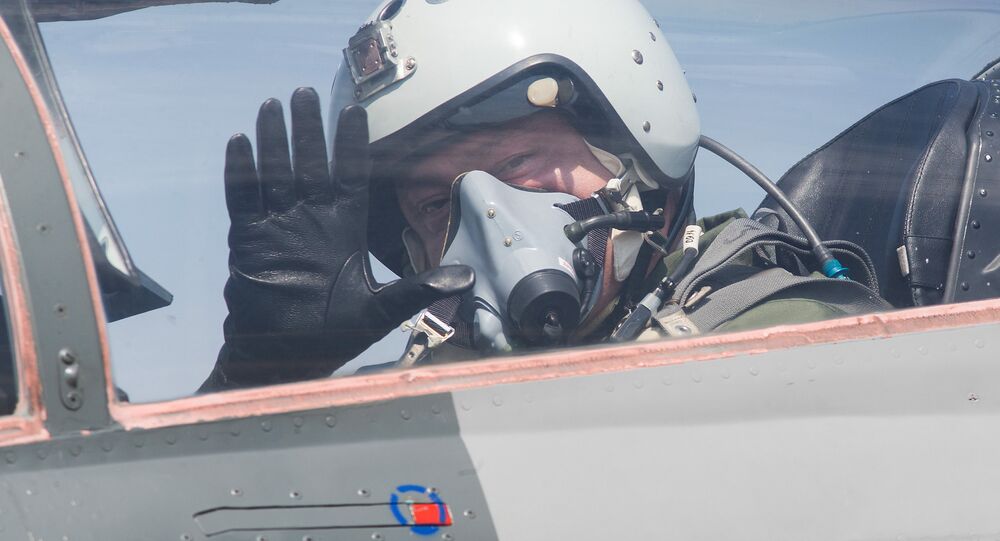 While the Ukrainian economy is on the brink of collapse and the political situation in the country might escalate into renewed military conflict, Ukrainian President Petro Poroshenko seems to be totally detached from reality, according to military and political expert Viktor Baranets.

Last Saturday, the head of state used a Soviet multipurpose MiG-29 fighter jet to fly to a military airfield in the Vinnytsia region in order to congratulate military pilots on the Ukrainian Air Force Day, a move that was perceived by some people as "cheap PR."

"The Ukrainian president flying with an old MiG-29 — is a miserable counterfeit and a ridiculous attempt to show off," military observer Viktor Baranets said in an exclusive interview with Zvezda TV channel.

"Petro Poroshenko wants to be like all dignified presidents. Of course, this is a PR campaign, of course, it's an attempt to show off. Look, Ukrainian aviation as such does not exist, especially after a huge number of aircrafts were destroyed in the southeast of Ukraine…. Poroshenko wanted people to be proud of him, but prompted lots of jokes instead," he continued.

Social media users reacted to Poroshenko's move with irony. Many of them made fun of the Ukrainian leader's flight.

​"On August 5, on the Ukrainian Air Force Day, Poroshenko pretended that there is actually an air force in Ukraine, and flew with the MiG-29 fighter jet."

Another Twitter user nicknamed gaewmaxim ironically wondered if the law on decommunization adopted in Ukraine does not apply to the Soviet technology.

​"The president is the lucky one. Using his official position, he flew a modern fighter like a taxi with his own driver — the colonel general," another social media user wrote on Facebook.

"It's unpatriotic to fly a MiG-29," another commentator said, implying the fact that the fighter jet was manufactured by the Soviet Union.

Now users of social networks are waiting for Poroshenko to "take a trip on board of a submarine."