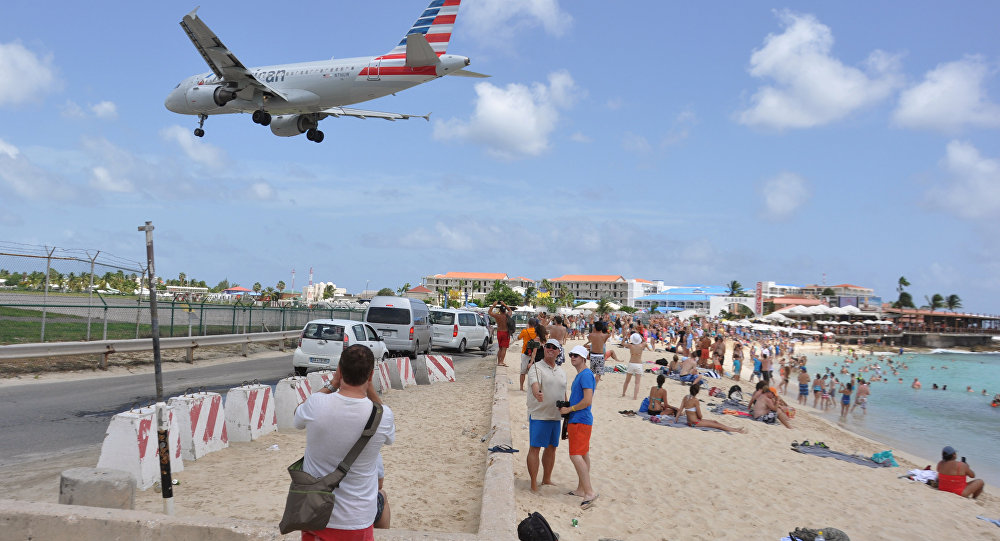 A 57-year-old woman from New Zealand died on the island of St. Maarten after standing near the jet blast from a departing plane at the Princess Juliana Airport Tuesday.

According to reports, the tourist was vacationing with her family, but after realizing she was passing the famous low-flying planes near Maho Beach, she quickly walked over to the area, which is marked with several danger signs.

"I met with the family of the deceased this evening and while they recognized that what they did was wrong, through the clearly visible danger signs, they regret that risk they took," Rolando Bison, director of tourism for the island, told New Zealand Herald. "At this time I only wish to express my deepest sympathy to the family and loved ones while we continue to investigate what transpired."

Brison explained that as a Boeing 737 departed for Trinidad, it flew over tourists grouped at the bordering fence, which led to the unnamed woman being thrown back from the plane’s blast. She suffered fatal injuries after she landed on her head on the concrete pavement. Collected footage will be reviewed by local law enforcement to determine what exactly happened.

This isn’t the first time a tourist has been injured due to a blast from a plane at Princess Juliana Airport, known for its close proximity to beach-goers at Maho Beach. In 2012, another woman was thrown back by the powerful blast of an arriving JetBlue airliner. In that case, the thrill seeker sustained serious injuries after she was tossed against a low wall behind her.

​Speaking to CBS News, police spokesperson Ricardo Henson noted that hundreds of tourists regularly ignore the warning signs and gather around the fence, which leaves less than 200 feet between the beach and the airport

"Many people come just for the thrill of this main attraction, and unfortunately this time someone lost their life," said Henson.

According to reports from the New York Daily News, police officials do typically patrol the beach to ensure no Evel Knievel-inspired tourists ignore the warnings signs and approach the area.

Cuba to Participate in Caribbean Security Conference for First Time