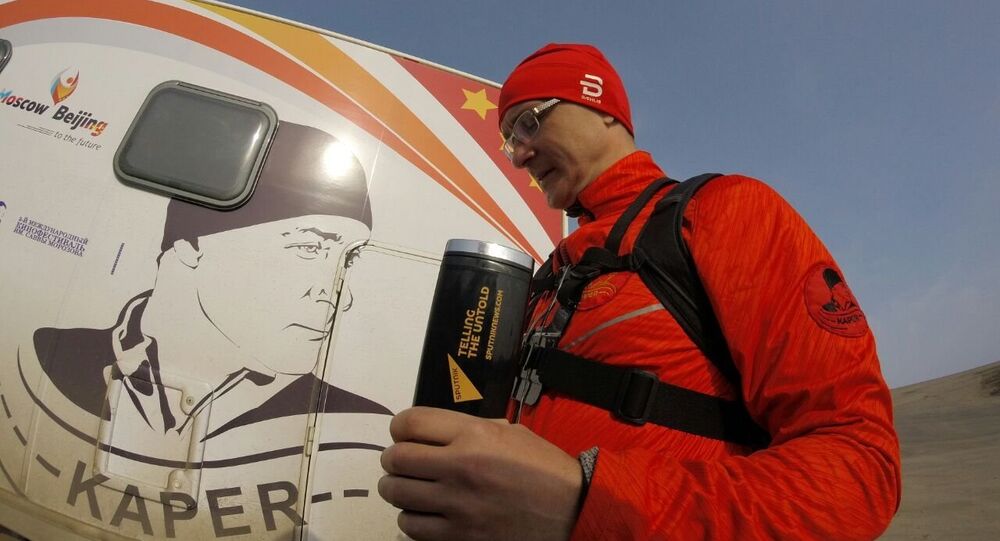 Russian Man With Plan and Press Caravan Running to China

Russian runner Alexander Kaper is carrying out the world's longest marathon, from Moscow to Beijing; he has already covered about 400 kilometers. In an interview with Sputnik, he jokingly said that during the marathon, he will hopefully not wear out more than the 25 pairs of running shoes that he took with him.

© Photo : Youtube/ Komsomolskaya pravda
Step by Step: Russian Traveler Completes Walk Around the Globe in Two Years
Russian runner Alexander Kaper has already covered about 400 kilometers of his 8,000 km marathon trek from Moscow to Beijing. Interestingly, the 35-year-old traveler and businessmen has already been nicknamed the "Russian Forest Gump."

In an interview with Sputnik China, Kaper said that he kicked off his 200-day marathon in early March and that he is currently arriving at the Russian city of Nizhny Novgorod.

He added that he has been "very warmly received" in those Russian cities which he has visited during the marathon, because "everyone supports the idea and they want to become part of a humanitarian move to 'build bridges' with China."

© Photo : provided by the project manager
In this file photo Alexander Kaper seen near the Russian city of Nizhny Novgorod

"It was quite easy for me to overcome the first 400 kilometers and only one pair of sneakers was torn. I brought a total of 25 pairs with me and I hope it will be enough before I reach Beijing," Kaper said, jokingly.

He added that he is accompanied by a special camper van, which is equipped with a stove, a refrigerator and a shower.

Karper also noted that he is being accompanied by a team of camera men, photographers and a project director, and that he covers about 35 kilometers daily, learning Chinese language in his spare time.

"Every day I teach myself 10 words [in Chinese] so that I can communicate at least a little bit when I arrive in Beijing," he said.

When asked about his thoughts on 44-year-old German runner Kai Markus Xiong reportedly planning to cover the 12,000 km stretch between Hamburg and Shanghai during his own super-marathon, Kaper expressed satisfaction with the fact that he has "common interests" with his German colleague.

"I'm not striving to break any records and I'm not going to compete with him. The main thing is how I feel during my marathon. It's cool to understand that I'm not alone in doing this," Kaper said.

If you're interested in keeping tabs on Alexander Kaper's intercontinental marathon, you can visit the website of the event: москва-пекин.рф.