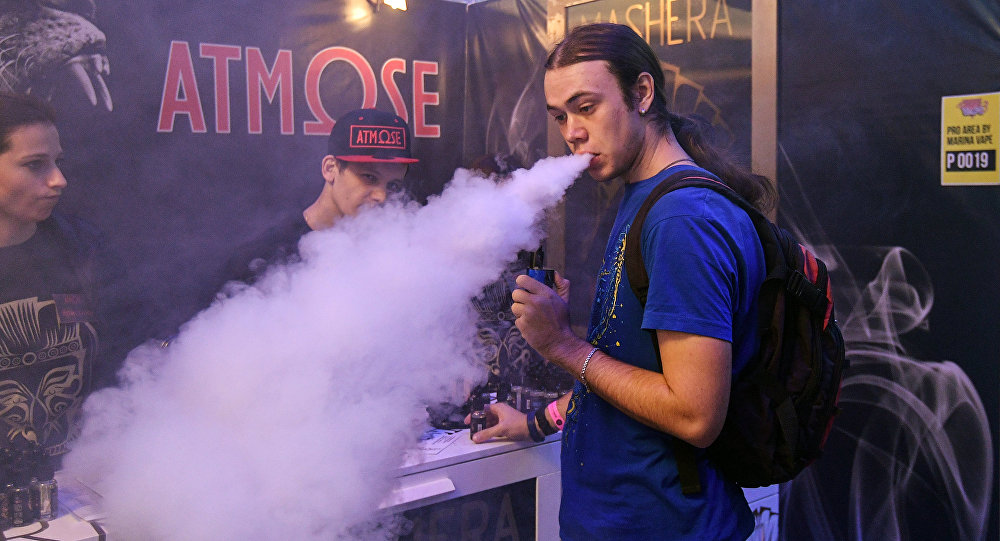 Electronic cigarettes and nicotine vaporizers are not only a health hazard, but may also pose a significant threat to Russia’s national security, according to the country’s former Chief Sanitary Inspector Gennady Onishchenko.

© AP Photo / Frank Franklin II
Planet of the Vapes: Claim E-Cigarettes Much Less Toxic Than Traditional Tobacco
Electronic cigarettes, or e-cigarettes for short, are small handheld devices which vaporize flavored liquids (which usually, but not always, contain nicotine) for their users to inhale. The use of e-cigarettes is sometimes referred to as 'vaping'.

Tobacco companies and e-cigarette proponents insist that vaping poses a far lesser threat to one’s health than smoking and do not produce the so called ‘second hand smoke’. However, their opponents argue that e-cigarette vapors do in fact contain carcinogens and that these devices actually help increase the number of smokers instead of decreasing it.

Gennady Onishchenko, Russian MP and the country’s former Chief Sanitary Inspector, told RIA Novosti that these devices pose a serious public health threat in Russia, but that unfortunately many of his former colleagues care more about the economy and investments.

"International tobacco corporations like, for example, Philip Morris, capitalize on this. Their representatives are being invited to by the government to discuss the manufacturing of vaporizer cartridges in our country with people responsible for public health. I consider such proposals a direct threat to Russia’s national security," Onishchenko stated.

He dismissed claims that the 'tobacco lobby' is allegedly opposed to electronic cigarettes, pointing out that tobacco companies are highly unlikely to fight against a product that they themselves have developed and are now trying to introduce into those countries which introduced anti-tobacco laws.

"Such rumors are often produced by unscrupulous scientists and ‘tobacco lobby’ advertising campaigns. When comparing vaporizers with cigarettes they tend to emphasize everything save for the former’s most important component – nicotine. The ads promoting vaporizers claim that the vapors produced by these devices are devoid of the substances contained in cigarette smoke, but they do not mention that these vapors contain nicotine," Onishchenko warned, adding that a growing number of people, especially young people, are becoming addicted to nicotine thanks to the vaporizers.

He remarked that e-cigarettes were created as a response to a number of major anti-tobacco legislative acts adopted in many countries, and that this move can be countered by proper regulation.

"All in all, the issue of electronic vaporizers can be resolved if we were to recognize them as tobacco products and start treating them as cigarettes. I’m positive that certain anti-vaping measures will be enacted sooner or later, but this process will take time. Meanwhile, the tobacco companies will help a great number of people become addicted to nicotine, and if vaporizers get banned then the companies will simply switch back to ordinary tobacco," Onishchenko surmised.