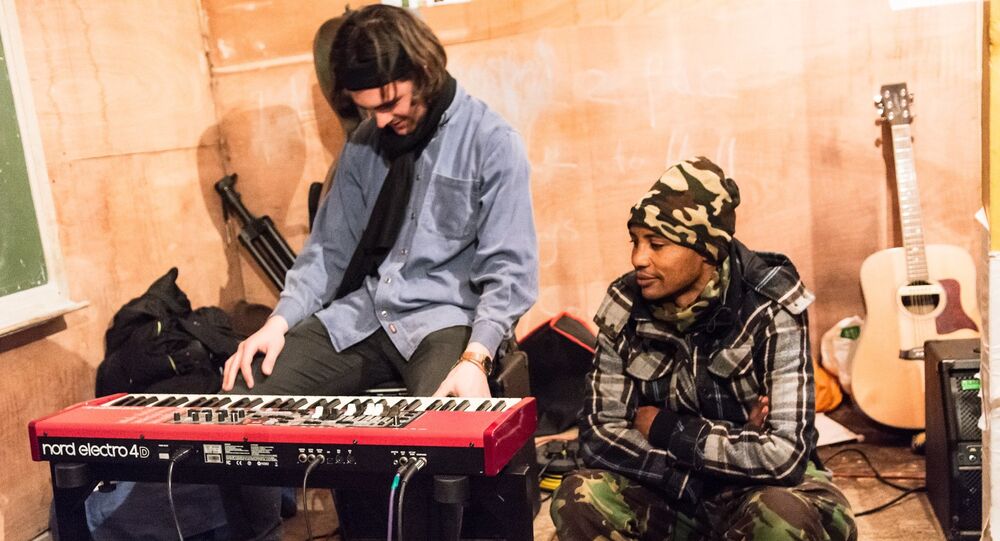 Sputnik followed a creative team of musicians who travelled to the so-called 'Jungle' refugee camp in Calais to find talent and offer some hope to migrants who had fled war and poverty in Africa and the Middle East.

The team travelled to the camp to hear the migrants’ stories, to connect with local musicians and to find areas of possible collaboration.

“These guys basically found that there are actually some good artists and good musicians in the jungle; in this, unfortunately, quite horrible place. But they didn’t have an outlet to sing or play their instruments and we gave them that opportunity,” musician Jay Burgess tells Sputnik.

The aim of this project is to respond to the humanitarian crisis and to give at least some hope to people; to tell them that they are not alone.

“They might be able to let go of what they are feeling through their music and we just want to give them a bit of peace in a tough time,” says Jay Burgess.

“It’s very emotional because these guys are singing from somewhere different. They are singing about something that is so real for them. Or even just the way they play. There is some kind of conviction to it. It’s amazing to experience,” continues the musician.

Many Europeans, such as the British who once saw Calais as a weekend getaway spot in Europe reachable by hovercraft, look down on the migrants or see them as barbarians at the proverbial gates.

One of the rallying cries of the recent Brexit vote was that they must be stopped from making it to the United Kingdom. They are seen as unwanted, uninvited and impoverished guests in a country that perceives them as parasites.

But if you listen to this album, you will find some really talented and especially creative people.

Thousands of people have fled their homes in Africa, Afghanistan, Syria, and elsewhere in the Middle East because of ongoing war, lack of opportunity, the threat of conscription and oppressive governments. They sought to make it to the UK, as many know English as a second language.

They are treated like the unwanted detritus of humanity, and they are slowly dying.

The migrants settled down in a temporary camp based on the outskirts of Calais, the so-called “jungle”. The camp has become home to more than 6,000 men, women and children.