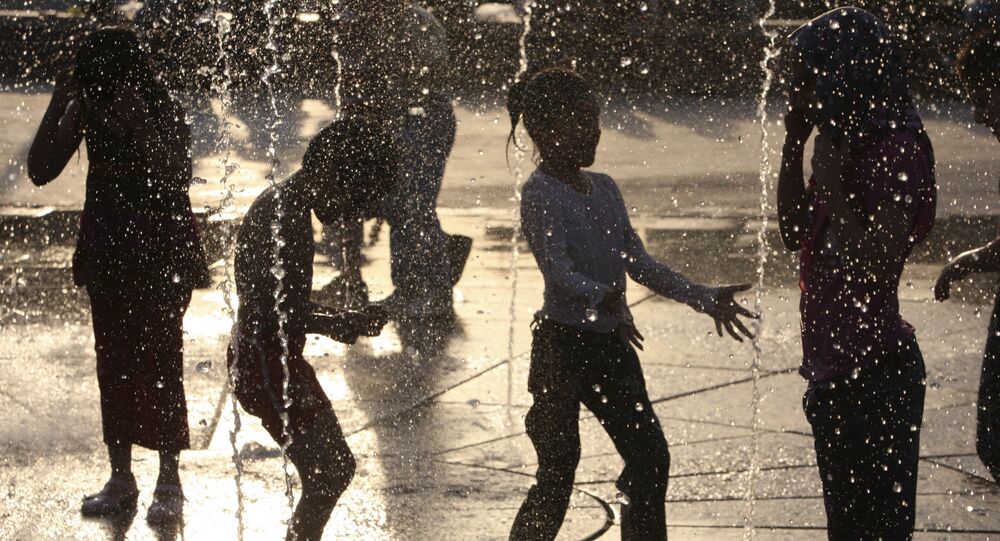 Maybe one day Pokemon GO will win hearts and minds of Iranian people, but for now local kids together with adults prefer traditional games, most popular of which told by Sputnik.

Haft Snag or seven rocks is an Iranian traditional game, in which 7 flat stones, a small ball similar to a tennis ball and 9 to 11 friends are required.

Rules are quite simple. Players divide into two teams of 5-6 people. At the beginning of the game it is discussed which team takes the attacking position, and which will take the role of the defender. Out of stones a tower is made, around which a circle is drawn. The attacking team tries to throw the ball in the tower from minimum 8 m distance.

The main difficulty here is that after the tower is knocked down, the team has to restore it. But to come close enough to the scattered stones is not as easy as one would think. Defenders team main task is to hit their opponents with the ball while they try to get closer to the stones.

© AP Photo / Vahid Salemi
Shia Holy City May Become Iranian Video Game Industry's Capital
If all opponents retire from the game, defenders team wins. Haft Sang has additional rules to make it fairer for both sides. As for example, the rule of 20 seconds. If a defender holds the ball for more than 20 seconds, one stone is removed from the tower.

There are also rules protecting members of the attacking team. Player, who shoots down the stones, has to raise his hand up and give a cry “Seven stones,” after which no one can throw a ball in him.

Iranians say that the game carries a deep meaning and promotes moral development. The team that knocks down the tower has to restore it. The morality here is: after destroying something, a person has to think how to repair it, and this is not always easy. Thereby, Haft Sang is a game, in which players must be able to move quickly and build a clever strategy.

© Photo : 2D Among Us.
Pokemon Go Soviet: What Hit Game Looks Like With Soviet Cartoon Characters
Another great game for friends is Hop Hop. It can be played as inside at home, as outside. Game rules are quite simple. All players sit down or stand up in a circle and in turn begin to call out numbers.

One, two, three, four, but instead of “five” person, whose turn it is, must say “ho hop”, after which the counting continues: six, seven, eight etc.

The player has to say “hop hop” when it comes to number “ten”. And the same story repeats on numbers 15, 20, 25. The person, who confuses all, leaves the game.

The short stick, so-called “pil,” is placed on two bricks or lumbers. Player from the first team has to throw up the little stick with the end of the long “daste” and beat off the small stick towards the two bricks of the second team. If the player won’t be able to do so, he gives away his place to the next person in his team. If no one was able to make it work, second team gets the turn.

Opponents’ task is to beat off “pil”, flying in his direction, and not to let the small stick land next to their bricks. If the player was not able to beat the stick off, the next turn goes to his opposer. If it turns out, distance of the flown stick is measured in “daste”.

All distances ad up when the sum reaches a certain number (for example, 50), players from this team in turns beat off “pil”, as they are playing Ping-Pong. After the last player beats off “pil”, the person, who caught “pil”, throws it back with “daste” from his original standing spot. And so does every member of the team. Players of the losing team should run behind each other the overall distance of “pil’s” resulting flight from the starting point to the ending point.

Unlike in previous games, this gave does not require a certain number of players, and the only things needed are five round stones just bigger then hazelnut size.

© AFP 2021 / Leon Neal
'Three Words Game': Twitter Users Describe 2016
All five stones are laid out on the floor on a small distance from each other. The first player picks up one stone and throws it upwards. While the stone is in the air, the same player has to pick up another stone from the floor and catch the first stone with the same hand. And so on with every stone on the floor.

All stones rest on the floor but this time two lie together. Similar t level 1, the player has to throw one stone up, after which he has to pick up two stones from the floor and with the same hand catch the falling stone. And so on with every stone on the floor.

Players are doing the same action as on the first two levels, only now players have to pick up one stone and then three.

Player throws one stone up and during this time has to pick up four stones from the floor and finally catch the first stone.

At this stage, the player has all five stones in his hand, and one would say that this must be the end, but the game continues. Attention! All actions are done with just one hand. Now the player has to throw one stone up, meanwhile knocking with his full of stones fist on the floor and catch the stone.

Again all stones should be laid down on the floor. Player takes one stone and throws it up. Meantime, he picks up another stone, catches the first one, and throws the second one up, while putting the first one on the second stone’s place. Then he does the same with the third rock and two others.

Player throws all five stones at the same time, while making a clap, and catches stones with his both hands. Then he does absolutely the same thing, only this time the player has to catch five stones with the other sides of his hands. Again throws stones up and this time catches with ordinary side of this hands.

He player, who was able to accomplish all levels without mistakes, is the winner. Dropping stones while the game goes on, the player gives his turn up to the next player.

Two players sit in front of each other, one player puts his hand on the floor with his palm facing down. The winner puts down all stones on his opponents hand. The loser has to throw all stones up and catch them with his palm. If he won’t be able to do that, then depending on how many stones he dropped, he will be punished.

In case you didn’t know the word “dampaei” translates as “flip flops,” which is the main thing needed for this game.  Dampaei is so common in Iran that here are no strict rules for it except for cards, probably with footballers.

Kids lay their cards on the ground, putting small stones over them. Then players throw their flip flops. The kid, who threw further, gets all the cards. The game is popular and loved among Iranians that an app on android already exists.