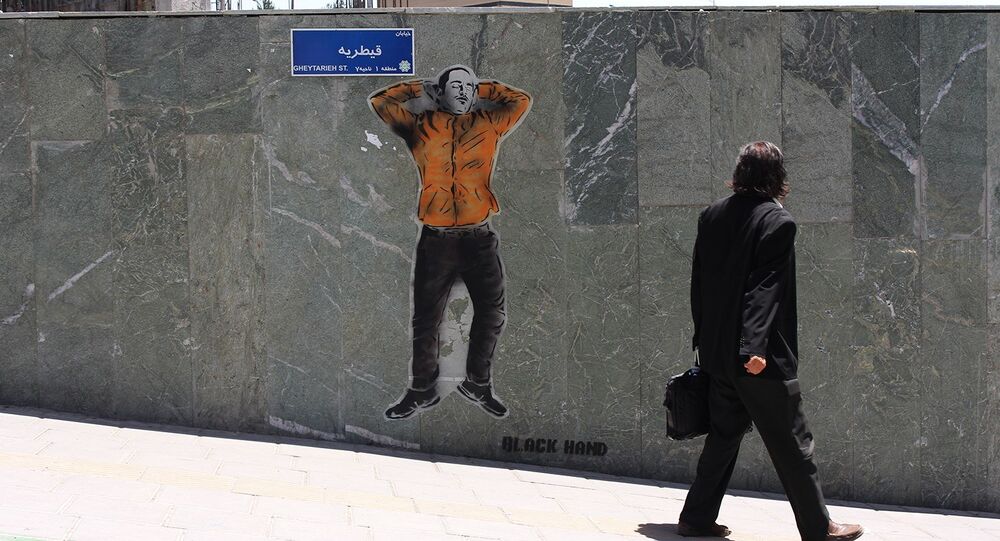 It’s been seven years since the elusive graffiti artist known as Black Hand started painting their creations on buildings in the Iranian capital.

As the artist, sometimes referred to as the Iranian Banksy, painted a new series of murals marking their seventh year of stirring up Iran’s establishment, let’s take a look at a short retrospective of some of Black Hand’s works.

The caption says "Black Hand: 7 years since my appearance in Tehran." Social media users speculate that the mural is in fact a self-portrait, and while the artist’s gender as yet remains a secret, the flower may serve as a hint that Black Hand is in fact a "she."

Several years ago a French café in Tehran was closed down due to political reasons. This graffiti commemorates the event, and the caption that says “Let’s go play” is interpreted by Twitter users as a call to pursue one’s dreams and desires no matter how distant and difficult the goal may be.

From the streets of #Iran http://t.co/JPEFRtLn8W via @ArtRadar
Photo by artist Black Hand#streetart #graffiti pic.twitter.com/22CfcyrAzo

Gender equality is one of the prevalent themes in Black Hand’s art. This mural, depicting a girl wearing a hijab and an Iran football shirt and holding a washing-up liquid bottle above her head as a trophy, appeared in Tehran in June 2014 as a response to a ban that prohibits Iranian women from attending football and other sporting events.

And if the previous mural may appear somewhat ambiguous, then this image leaves no doubt about how Black Hand thinks about this situation.

Black Hand also pays attention to the question of animal rights. The caption to this mural says "With whom did you get mixed up with?” the question being directed to a cat held by an abusive owner.

"My place is here, on an armchair," a dog depicted on this mural exclaims.

Perhaps one day Black Hand won’t feel the need to conceal his or her identity, or maybe we’ll never learn who the artist’s real identity is, but one thing remains clear: these are definitely not the last murals by the Iranian Banksy to appear on the walls and buildings in that Middle Eastern country.