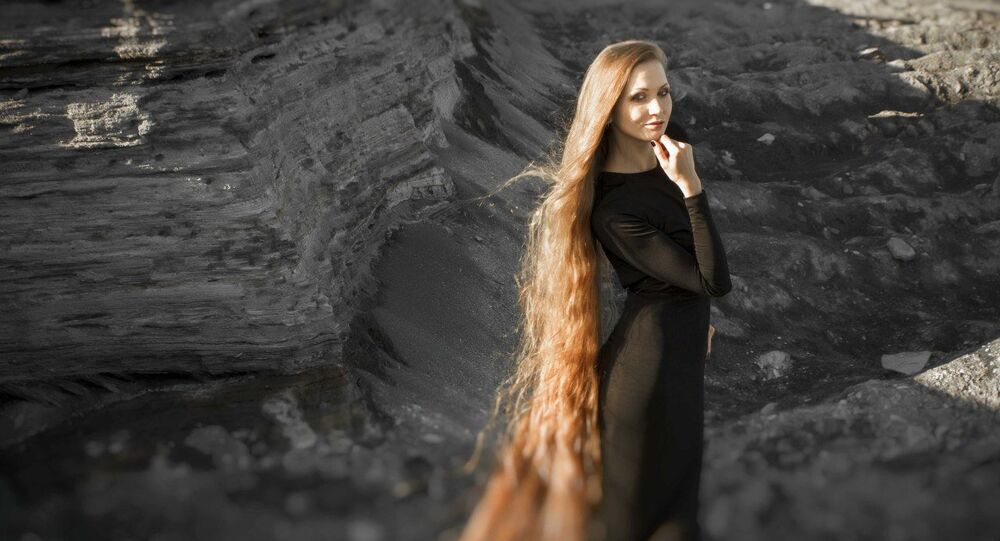 Thirteen years ago, a certain female resident of the city of Barnaul in Russia's Altai Region decided to see how long she could grow her hair, eventually attracting the attention of Western media who quickly dubbed her the "Russian Rapunzel."

Now, Daria Gubanova, who also goes by the nickname "Vesnushka" (Freckle) on media accounts, sports a magnificent mane that is over 5 feet long which truly makes her look like a character straight out of a fairytale.

During an interview with Sputnik, Gubanova pointed out that she wasn’t inspired by Rapunzel’s tale, but that she merely wanted to grow her hair long enough to reach her toes.

"When I was 14, I cut my braid slightly above my knees… For two years I used to cut my hair pretty short and even started coloring it… Then when I was 16, a friend of mine mentioned during a casual conversation the long braid I used to have and claimed that I would never be able to grow my hair that long again. So it all started when she and I made a bet about it… I never really thought about what to do afterwards," she said.

Despite the more-than-impressive length of her hair, Gubanova says that taking care of it is not that difficult: she washes her hair twice a week and doesn’t use any dyes or "chemicals," relying instead on what she called "grandma’s recipes," which are based on "natural products."

Being a generous person, she even shared the secret recipe of her favorite hair mask.

"My favorite mask is based on mustard and mayonnaise. I must warn you though, it may not be effective for all types of hair, so don’t rush out to the shops for mustard just yet," Gubanova jokingly remarked. "Take two table spoons of mayonnaise, mustard and olive oil each; apply these ingredients to your hair roots, then cover your hair with cellophane and a towel. Wait one hour, then wash your hair with warm water. This mask stimulates the dormant hair follicles."

She also recommended using masks based on olive and linseed oil to provide hair with nutrition.

The hobbies of "Russian Rapunzel" include sewing and painting, as well as making valenki (traditional Russian winter footwear made of felt wool) for children.

She also enjoys parachuting and is eagerly waiting for the beginning of this year’s skydiving season to test her skills once again.

Meanwhile, Gubanova said that she is quite flattered by all the media attention she has recieved.

"Foreign media agencies started writing about me a while ago; it’s their Russian counterparts that only noticed me just now. I admit though, I like it. They say there are reports about me on radio, on TV and in the Internet. I’ve never actually seen or read any of them, except for maybe a couple of articles. Guess I was just too immersed in my work," she said.