Iconic US pop artist Andy Warhol's first studio in New York, located in a converted firehouse in the city's posh Upper East Side, is currently on sale for ten million dollars, according to the website therealdeal.com. 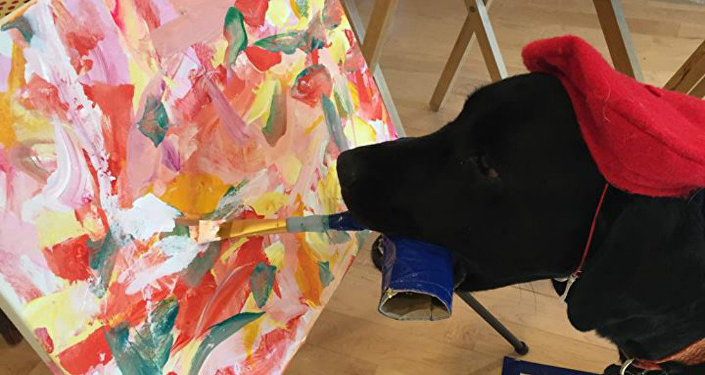 Facebook/Dagger II aka DogVinci
Dextrous 'DogVinci': A Pooch With a Penchant for Painting
The first studio US pop artist Andy Warhol ever occupied in New York is now on the market for ten million dollars, the website therealdeal.com reported.

A two-story former firehouse located on the Upper East Side became the first studio Warhol started to rent outside of his apartment in 1962. At the time, he paid just 150 dollars per month (approximately 1,183 dollars in today's money).

Warhol lived at 1342 Lexington Avenue between East 89th and East 90th Streets while he used the New York studio, which is located at 159 East 87th Street.

Prior to the city's loft law, artists were prohibited from living in the commercial space they commonly rented in order to perform their work, but many defied the rule. After it was struck down in 1982, the price of artists' lofts exploded.

The 5,000 square-foot facility is thought to be the very studio where Warhol created his "Death and Disaster" series, which dealt with catastrophes and horrendous accidents.

Warhol's real estate had repeatedly been associated with high-profile sales.

In particular, his former townhouse at 1342 Lexington Avenue was sold for 5.5 million dollars in 2013, and in December 2015, Warhol's former 5.7-acre Montauk estate was sold to Adam Lindemann, founder of the gallery Venus Over Manhattan, for 50 million dollars.

Andy Warhol's real name was Andrew Warhola; he was born to a Carpatho-Rusyn immigrant family in Pittsburgh, Pennsylvania and became an internationally-renowned pioneer of the pop art genre who used photo-stencils in screen-printing to create images of pop culture icons, including Marilyn Monroe.

Warhol's works include some of the most expensive paintings ever sold; his large-scale canvasses have fetched as much as 100 million dollars.