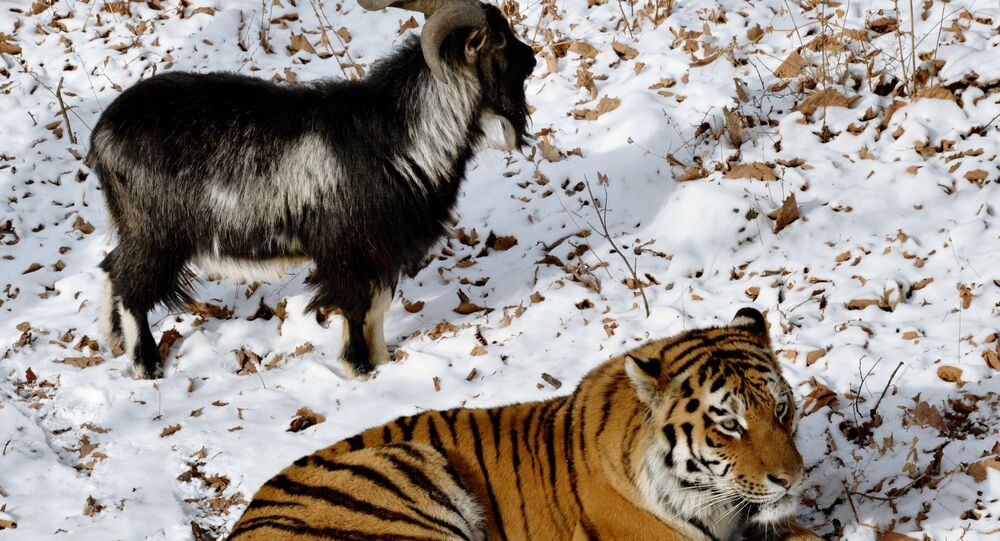 Amur the Tiger Celebrates His Birthday With a Meat Cake

© Sputnik / Vitaliy Ankov
Old Friendship Dies Hard: Goat Timur Sticks with Tiger Amur, Ignores ‘Fiancées’
Amur turned 4, which is equivalent to the human age of 18. The park's staff decided to celebrate this important date in a proper way and have prepared a gift for the B-day boy: a cake made of meat.

As the director of the park Dmitry Mezentsev said, the cake was made of chicken and beef and was given not only to Amur, but also to his sister Taiga.

After Amur quickly dealt with the meals, he was ready to play.

"Four years for the tiger is equivalent to eighteen years for a human being," Dmitry Mezentsev told LifeNews. "So today our Amur became an adult."

Amur the tiger gained his popularity due to his unusual friendship with a goat named Timur. The animal park's authorities gave the goat to the tiger in his cage as a meal but instead of devouring it, the tiger seemed to have developed a bond with the goat.

Due to their extraordinary relationship, the pair turned into a huge tourist attraction for Russians.