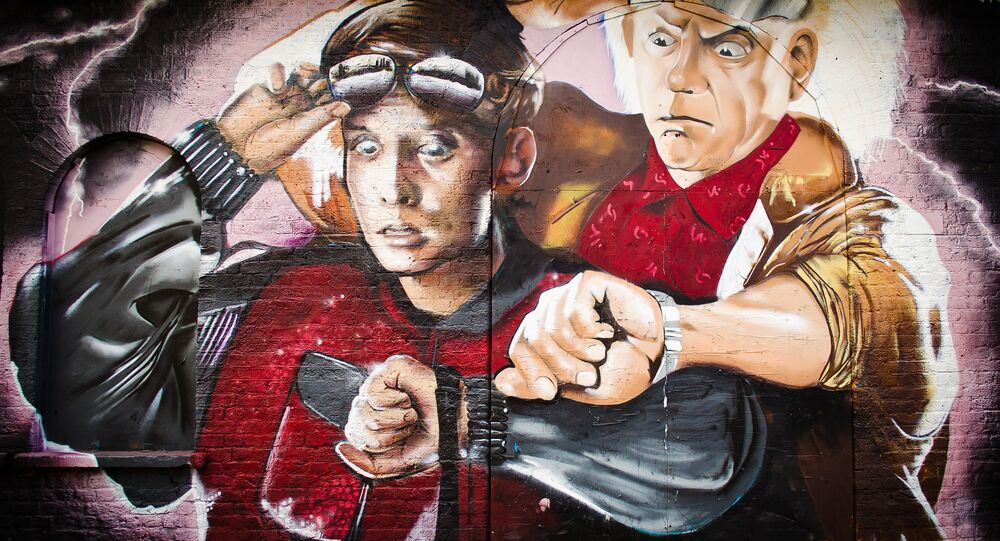 Back to the Future Day: Russian Fans Too Frustrated Over Lame 2015 'Future'

Russian Back to the Future fans joined together with fans from around the world today to mark Back to the Future Day, celebrating the day that Marty McFly and Doc Brown travelled forward in time in the second film. Like fans elsewhere, Russians couldn't help but poke fun at some of the promises made by the film which never materialized.

Wednesday marked the long-awaited day that Marty and Doc travelled to from back in 1989 to try to straighten out Marty's kids.

Like much of the rest of the internet, Russian-speaking social media users came asking, tongue-in-cheek, why many of the promised-for goodies from the expected 'future' never came to be.

"The day has finally come. Incredible. And in this connection: Where are my miracle sneakers and hoverboard?"

"Theoretically, today I should look out the window to see a flying car. Alas it seems it was not meant to be."

"Look, Marty, this is a selfie stick. And this Marty is a flushable toilet paper tube!"

"Where are my self-lacing sneakers? Where are the flying cars? I've come to the realization that we have let our ancestors down." (Poster on the Right: "Probably not the right year!")

Poster: "Marty, forgive us. We've screwed everything up."

In a sense, Russians weren't so different from fans worldwide, who also joked about the apparent lack of technological progress in the last quarter century:

Hoverboards, self-drying clothes and flying cars or not, people across Russia nonetheless made the best of the historic day.

"The time has come; I choose the hoverboard; no doubt it's the best."

"Look out for this guy today!"

Russian companies, bloggers and media outlets spent much of the day talking about the technologies predicted by the movie which did materialize. Russia's RIA Novosti went so far as to create a neat interactive infographic analyzing the various technologies found in the city streets and in Marty's 'smart home', and also took a look at the movie's predicted clothing styles, and more (in Russian).

"10 technologies from Back to the Future 2 which have become a reality."

Like BTTF fanatics everywhere, Russians with a bit of cash prepared for the occasion by creating a shortage for vintage DeLorean DMC-12s, presumably to sup them up and convert them into time machines. At least one DeLorean was reported to have driven through the Formula 1 track in Sochi today.

"In Russia, people are buying up the time machines from Back to the Future." (photo shows an ad for a DMC-12 sold in Novosibirsk, Siberia, apparently for the outrageously low price of 140,000 rubles $2,225 US).

Finally, popular Russian search engine Yandex.ru celebrated the anniversary in style, featuring a screen from the movie on their home page, showing just how much love there really is for this classic of 80s pop culture among Russians.

Back to the Future, Japanese Style

Back to the Future: Russian Inventor Testing Hoverboard