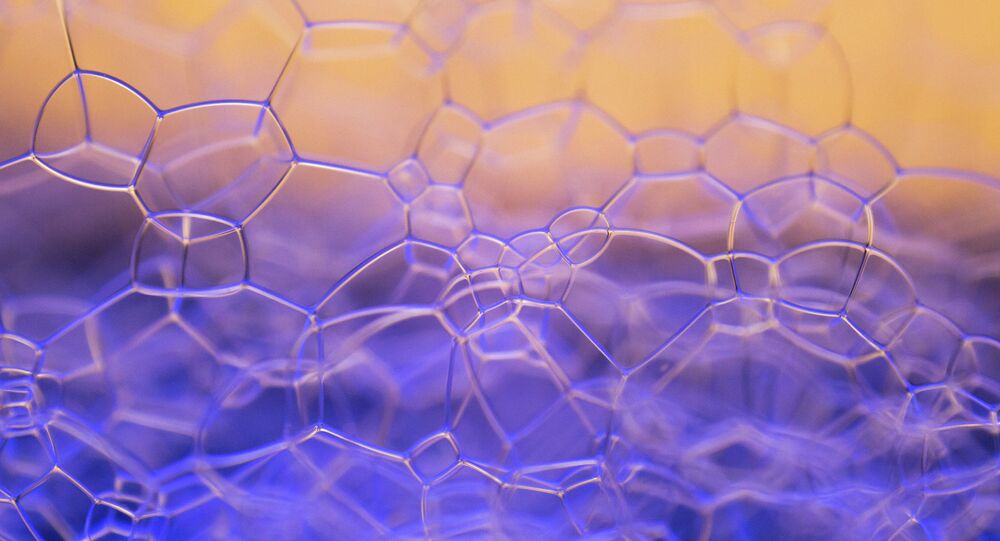 A team of scientists have narrowed down the ways in which teensy tinsy bubbles and turbulences in the fabric of space-time may be distorting reality at the itsy-bitsiest cosmic level.

The idea of "quantum foam" is that, at the subatomic level, space-time does not move smoothly like it does at a human (or galactic) scale. Instead, space-time may be bubbly, foaming, constantly turbulent. The scale of such foam would be at about ten times a billionth of a trillionth of the diameter of a hydrogen atom's nucleus, according to the scientists' statement.

"One way to think of space-time foam is if you are flying over the ocean in the airplane, it looks completely smooth. However, if you get low enough you see the waves, and closer still, foam, with tiny bubbles that are constantly fluctuating" said lead author Eric Perlman of the Florida Institute of Technology in Melbourne. "Even stranger, the bubbles are so tiny that even on atomic scales we're trying to observe them from a very high-flying airplane."

The team of scientists decided to try to test this theory by seeing if the theoretical "quantum foam" would be disruptive enough on photons travelling from great distances to be noticed.

Though their experiments — using some of the world's most powerful telescopes — didn't provide positive evidence of the existence of quantum foam, they did eliminate two theories about how the foam might work, and have narrowed down some of its characteristics.

First, the scientists needed something really bright, and really far away that they could use as a potentially distorted light source. That's where the quasars come in.

Quasars are very distant galaxies, and are some of the brightest objects in the universe. With a supermassive black hole at its center, the quasar's clouds of dust and matter get sucked into the black hole, radiating enough light to outshine any of the galaxy's stars.

So a team of researchers then created models of how light might potentially be distorted by quantum foam, and checked out how the quasars looked through three very powerful telescopes: the Chandra X-ray Observatory, the Fermi Gamma-ray Space Telescope, and the Very Energetic Radiation Imaging Telescope Array System (VERITAS).

Both the Chandra and the Fermi telescopes are managed by NASA, while the VERITAS is a collaboratively managed project of more than 100 scientists from 22 different institutions in the United States, Ireland, England and Canada.

If quantum foam does exist, it should distort the path of the photons — not by acting as an obstacle but by actually changing the nature of reality itself — and distort the resulting image of their point of origin over a sufficient distance.

The results  - published in The Astrophysical Journal — were that two of the models' results did not appear in the telescope's images of the distant quasars, so those two models — known as the 'random walk model' and the 'holographic' model — had to be discounted.

These models — to differing degrees — had predicted that the foam would diffuse the light more over greater distances — like light travelling through fog.

"We find that our data can rule out two different models for space-time foam," said co-author Jack Ng of the University of North Carolina in Chapel Hill. "We can conclude that space-time is less foamy that some models predict."

If there is quantum foam, it acts on a scale even smaller than suspected, and the experiments show that space-time is smooth down to distances 1000 times smaller than the nucleus of a hydrogen atom.

The idea of quantum foam was first posited in the 1950's as a way to resolve one of the greatest conundrums in modern physics: how to resolve relativity theory with quantum mechanics.

"Both quantum mechanics and general relativity have been enormously successful. They are two of the greatest successes that modern physics has had in the last century plus," Perlman said. "And yet for some reason that we don't understand, when you try to write gravity in the language of quantum mechanics, it's very difficult. Up until now it hasn't been done."

And it remains to be seen whether quantum foam — at a much smaller scale than previously suspected — turns out to be the missing piece that unites the two.