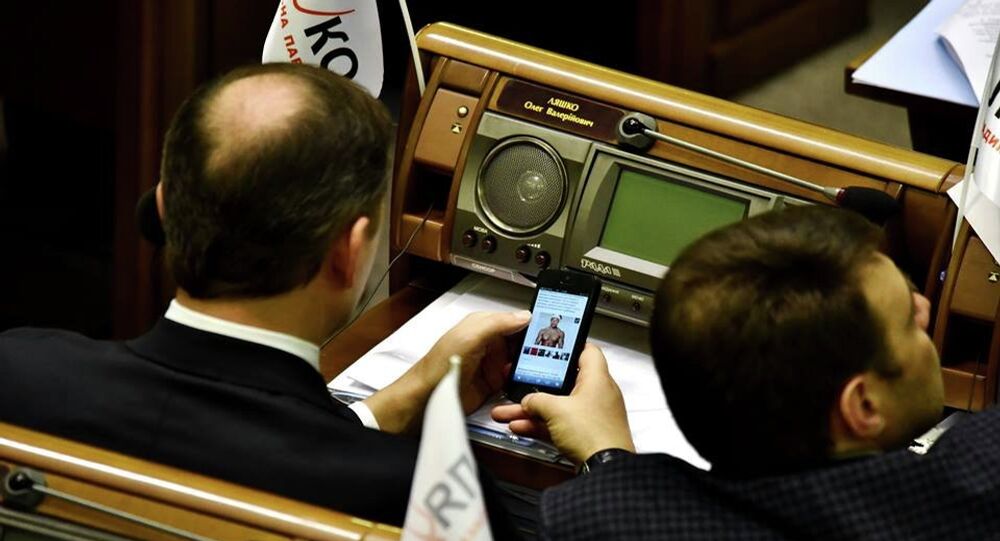 Russian media and social networks have exploded after hot-tempered Ukrainian Radical Party Leader Oleg Lyashko was found looking at a photo of shirtless "hottest criminal alive" Jeremy Meeks during a session of the Rada.

In a photo published Thursday by a Ukrainian parliamentary photographer, hot-headed Ukrainian Radical Party Leader and Verkhovna Rada deputy Oleg Lyashko was caught looking at a photo of what appears to be "hottest criminal alive" Jeremy Meeks during a session of the parliament.

Russian media and social network commentators were quick to pounce on the photo, LifeNews noting that "it seems that in a period of economic crisis, her odious people's deputies are more interested in male beauty than the problems of lawmaking."

Lyashko is seen gazing at the photo of Meeks on his cellphone. The photo appeared in the Facebook account of photographer Bogdan Bortakov.

Youtube / RT
If You Can't Beat Em, Beat Em Up: Ukrainian Rada to Install Boxing Ring
In 2010, Lyashko was implicated in a loud scandal after a video was released featuring the politician talking about sexual relations with another man. Lyashko denied the authenticity of the video, accusing it of being a doctored "provocation" using "modern technologies." Lyashko noted at the time that "personally, I have a traditional sexual orientation," and "if you want to know about other public people, ask doctors." The politician married event organizer Rosita Sayranen soon after. In late 2012, a spoof interview featured an angry Lyashko promising to beat in the face of a person suggesting that Lyashko should represent sexual minorities in Ukrainian parliament.
...
Reddit
Google+
Blogger
Pinterest
StumbleUpon
Telegram
WhatsApp
335