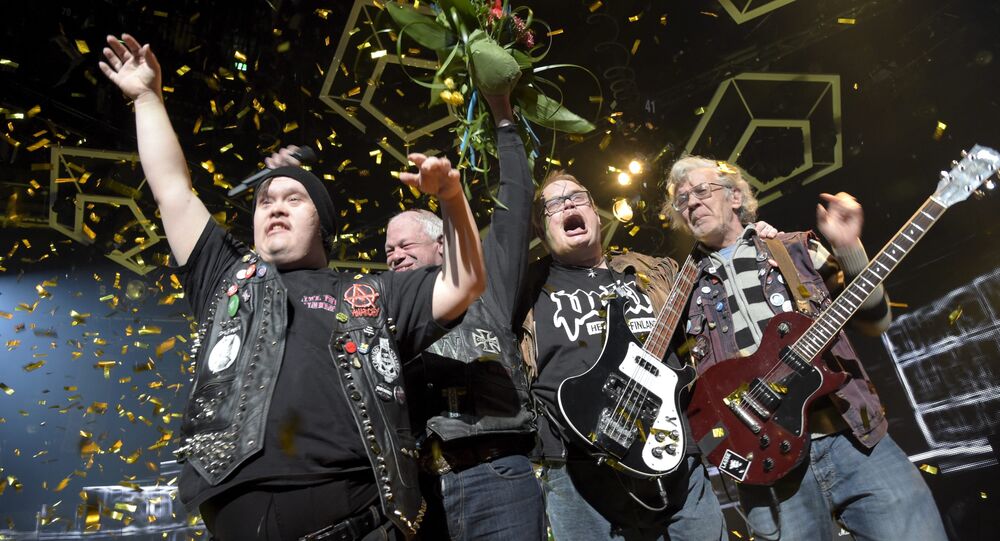 Finnish Punk Band With Down Syndrome Goes to Eurovision Semi-Finals

Brace yourself: Finnish punk band PKN, whose members suffer from Down syndrome, will represent Finland at the Eurovision Song Contest semi-finals in Vienna.

Finnish punk band PKN, whose members suffer from Down syndrome, continues its winning march – the rockers won the spot to represent Finland at the Eurovision Song Contest in Austria.

© Photo : Kalle Pajamaa
The Punk Syndrome: Band With Down Syndrome Applies for Eurovision
The band won the Finnish qualifiers on Saturday night and now PKN will represent the Nordic country in Austria.

The punk rockers’ entry song that is about a minute and a half long and tells about the tedious nature of daily chores earned 37 percent of viewers' vote in Finland.

“We’ll do it the same way in Vienna. One shouldn’t fix something that’s not broken,” a band member told Finnish broadcaster Yle.

The band PKN stands for Pertti Kurikan Nimipäivät and was formed in 2009. Since then, the band released a documentary called “The Punk Syndrome” showing how disabled people live and express their emotions through music.

Kalle Pajamaa, the manager of the band, told Sputnik last month that the band was very excited about the idea of participating in the Eurovision Song Contest. The band members – Pertti Kurikka (guitar), Kari Aalto (singer), Sami Helle (bass) and Toni Välitalo (drums) – all believe that their performance at the Eurovision will raise people’s awareness regarding the Down syndrome and help to support new social programs for mentally-disabled individuals.

“Pertti the guitarist for example is a big fan of Eurovision contest. Their families are supportive as well as the fans. Even the punk scene has been very supportive for the guys,” said the manager of PKN.

During the Eurovision Song Contest semi-finals in Vienna on May 19 and 21, the world will finally get to see the extraordinary rock band from Finland that is ready to rock out and show the unbeatable spirit of punk rock.