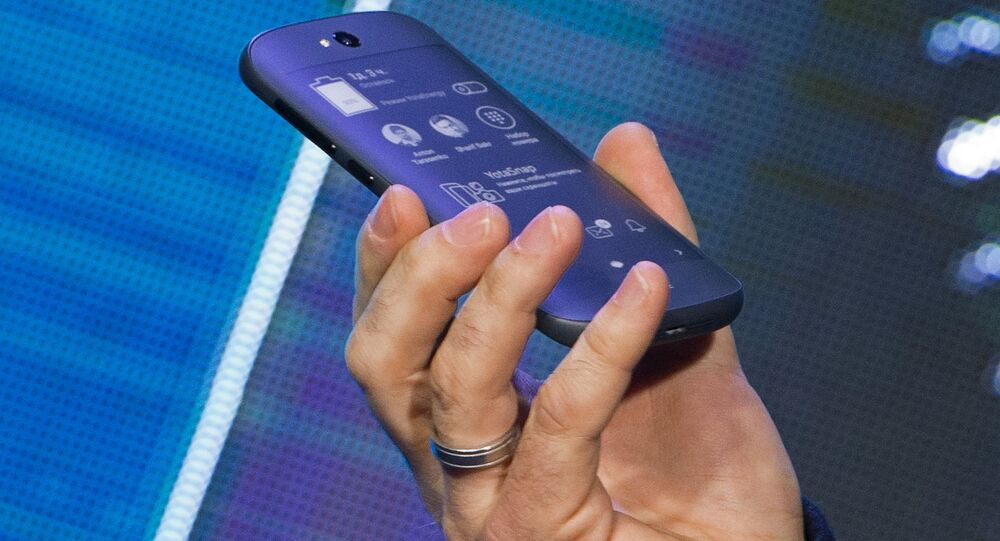 Yota Devices Company, one of Russia’s leading tech enterprises, has introduced its newest Yotaphone 2 during a special event in Moscow’s Gorky Park, and will start its sales in Europe this week.

MOSCOW, December 2 (Sputnik) — Russia’s leading mobile devices manufacturer, Yota Devices, officially introduced its second generation smartphone, the newest YotaPhone 2, featuring an appealing design, improved technical characteristics, along with its main feature and an e-ink screen on the device’s backside panel. The product will enter the consumer market at a price of roughly 33,000 roubles ($620).

According to CEO of Yota Devices, the smartphone has several advantages over its market counterparts. Consumption far less energy, the Yotaphone 2 can work for up to five consecutive days in the ‘read’ mode on a single charge. An ‘economical’ energy scheme allows the device to work up to two days straight without charging the battery, with most of the standard functions like calling, texting and reading emails available.

The device sells at a price of 32,990 roubles, which exceeds the price of Android-powered devices from Asian manufacturers like Samsung or Sony. The device boasts a 5-inch Amoled frontal screen, made of ultra-durable Gorilla Glass, and a backside 4.7-inch black-and-white e-ink screen. 74% of the device’s surface is touchscreen, Yota Devices company says. The e-ink technology, similar to the one used in e-books, allows better power conservation, along with reading in bright sunlight without any harm to the user’s eyes.

Yota Devices’ CEO said the company is intending to take on the global market. The new device will be available in 20 European nations this year; in early 2015 it will enter consumer markets in China and the rest of Asia-Pacific, after which it will be marketed in Canada and Latin America. Yota Devices company has not announced any plans of entering the US market.

Armenia to Launch Smartphone, Tablet in 2014