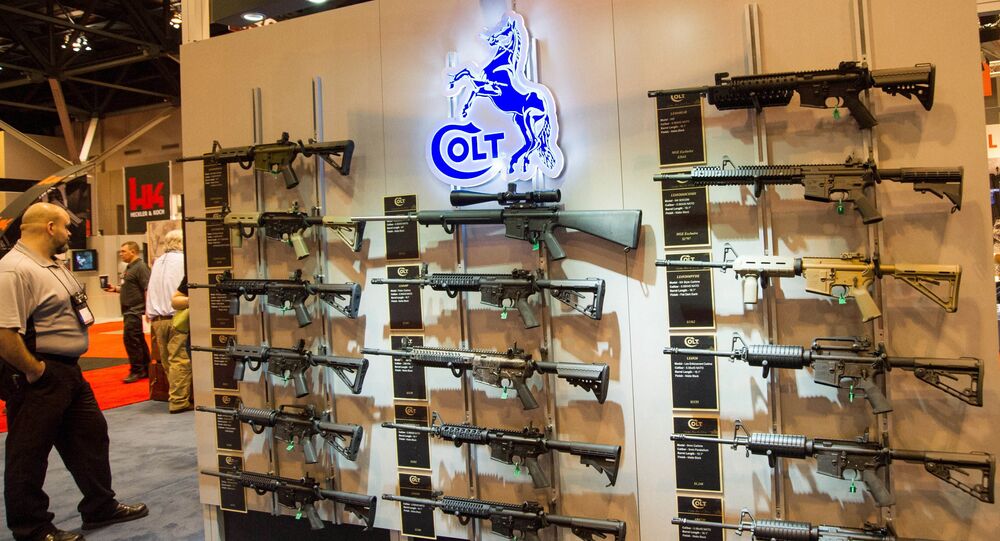 The US National Rifle Association (NRA) is at the forefront of the fight over Second Amendment rights as the Biden administration and Democratic Party are seeking to tighten up gun controls following deadly shootings in Georgia and Colorado. However, the 150-year-old group is in a heap of trouble itself.

The NRA has signalled that it's ready to aggressively lobby against federal and state gun measures despite being involved in lawsuits, bankruptcy, and investigations into its business conduct, according to the Wall Street Journal.

The influential lobby group's troubles began after New York Attorney General Letitia James kicked off an all-out offensive against it in August 2020 seeking to dissolve the association. According to AG James, the group's senior leadership illegally used millions of the NRA's charitable finances for personal use. In January 2021, the NRA filed a bankruptcy petition to restructure and move its charter from New York to Texas. The pro-gun group wanted the judge to dismiss the case or move it to an Albany court in the wake of bankruptcy, but to no avail: on 21 January, Justice Joel Cohen of the Manhattan Supreme Court denied all motions filed by the NRA.

Was the NRA's Noble Purposes Hijacked by its Executives?

Although AG James' attitude towards one of the US' oldest pro-gun groups raises questions given her earlier remarks that the NRA is a "terrorist organisation," the problem is that the entity's leadership may indeed be complicit in charity fraud, notes Wall Street analyst and investigative journalist Charles Ortel.

"If the allegations contained made by James are proven true, the noble and ancient purposes of the NRA would seem to have been hijacked by executives, directors and certain NRA vendors who may have enriched and/or derived illegal private benefits through attempted operation of a purported tax exempt family of organisations," he underscores.

Ortel, who has been looking into the Clinton Foundation's alleged fraud for several years, has only started to examine public NRA filings. However, from what he has seen so far, he believes that a "new, independent and tightly managed entity or set of entities will be best able to fulfil the important mission of preserving Americans' constitutionally protected rights to 'keep and bear arms'."

"The extended family of rogue Clinton Foundation entities is far more seriously a problem [than the NRA's alleged fraud] thinking financial terms," suggests the Wall Street analyst. "In political terms, the NRA is likely far more influential than the false-front Clinton 'charities.' In rural voting districts and in red states, the NRA yields gigantic influence through its power to make or deny endorsements, and through its outreach programmes."

Kansas Judge Tries to Save the NRA

On 30 March, Bloomberg reported that Kansas judge and NRA board member Phillip Journey had stepped in seeking to "save the National Rifle Association from two existential threats: New York’s Attorney General and the executives who currently run the organisation."

In February, Journey proposed appointing an independent examiner to investigate the allegations of fraud and self-enrichment by NRA executives. According to him, this measure would help determine the fate of the NRA and its leadership instead of dissolving the organisation altogether.

Bloomberg cited the Kansas judge's 5 March filing in which he called AG James' lawsuit and attempts to dismiss the NRA bankruptcy an "existential threat" for the pro-gun group.

Journey urged US Bankruptcy Judge Harlin D. Hale to consider the interests of "millions of members, volunteers, donors, and participants across the country who actively support the NRA" insisting that the court processes could "represent an opportunity" for the organisation "to change course, foster full transparency, strengthen its corporate governance, and eradicate any mismanagement."

I went to the NRA's emergency board meeting yesterday. It ended with the board retroactively approving the bankruptcy filing. But not without drama: Hours spent behind closed doors, LaPierre leaving out a side door, & dissenters calling it a "snipe hunt."https://t.co/rJ8yYBkyjo

​Meanwhile, NRA Second Vice President Willes K. Lee denounced Journey’s motion as "not genuine nor credible." For its part, the official committee of NRA unsecured creditors opposed an independent examiner, arguing that a new probe will duplicate an earlier investigation and will be a waste of time and money. The bankruptcy judge is due to start hearing of the NRA case on 5 April 2021.

© AP Photo / Sue Ogrocki
People walk by NRA convention signage in the Kay Bailey Hutchison Convention Center in Dallas, Thursday, May 3, 2018. The convention is scheduled to go through Sunday.

'Second Amendment is One of US Most Hotly Contested Issues'

The NRA scandal is unfolding at the time when Democrats have ramped up attempts to toughen US gun laws. The House has already passed two bills, H.R. 8 and H.R. 1446, in order to close loopholes in the background check system. Joe Biden is urging Senate Republicans to embrace the bill and floating the idea of banning AR-15-type assault rifles. In 1994 the US Congress restricted the manufacture for civilian use of certain semi-automatic firearms and high-capacity magazines for 10 years.

did you take a nap all last summer or what https://t.co/ao4tajHXuR

​The Republicans argue that the two House bills would violate constitutional rights by making it more difficult for law-abiding citizens to buy a firearm. Thus, H.R. 1446 extends the waiting period in which a government official can approve a gun sale from three days to 10 days. GOP lawmakers are similarly concerned that H.R. 8 envisages creating a database of all firearm transactions allowing the government to track guns of the American people.

Punchbowl News: The Biden admin is moving toward executive actions on gun control. This includes regulating the sale of 'ghost guns,' untraceable homemade weapons. The admin believes the kits used to make these weapons can be regulated under current federal law.

​Ortel highlights that in the US, "interpreting the Second Amendment is one of our most hotly contested issues."

"Many on the left view 'the right to keep and bear arms' as a limited one, extending to the type of arms used back at the time the Second Amendment was adopted late in the eighteenth century," he says. "Some on the left go so far as to suggest that the right to bear arms does not expressly contemplate ammunition."

However, those on the right, including NRA members and affiliates, support the Second Amendment "not merely to protect all of us from foreign enemies, but to protect Americans from overreach and abuse by government officials," the analyst explains.

He laments the fact that the NRA leadership is apparently exploiting the organisation as a vehicle to subsidise their high living, while the organisation's supporters, who have not yet seen their many public filings, continue to donate to it seeing it as a "force for good."

"Unregulated, complex 'charities' are rife with opportunity for unjust enrichment which is a disgrace on so many levels," the analyst stresses.