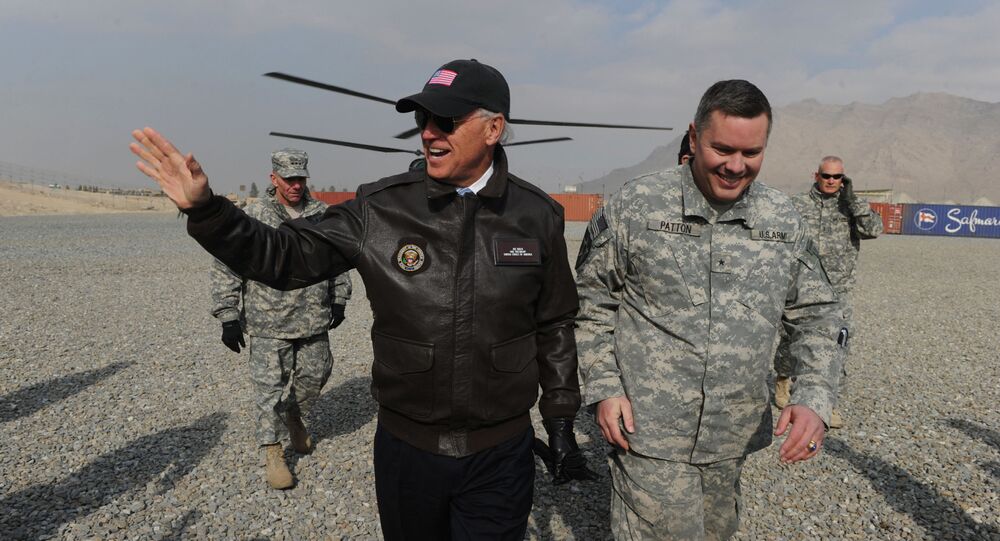 This week, anonymous sources within the Trump administration told US media that China may have offered bounties to unnamed “non-state actors” in Afghanistan to attack US troops. The story comes months after this summer’s never verified claims by the New York Times and the Washington Post that Russia was offering similar payments.

On Thursday, Fox News doubled down on reporting by Axios from a day earlier suggesting that the US government has been working to declassify “uncorroborated intelligence” that China has offered cash rewards for the heads of US troops in Afghanistan. President Trump has reportedly been briefed on the matter, but has yet to comment publicly.

Beijing has blasted the claims, with a foreign ministry spokesperson characterising them as “fake news” designed to “smear China,” and suggesting that the allegations were a sign of just “how crazy some people have gone” to try to poison China-US relations. “We have never started a war with others, not to mention paying non-state actors to attack other countries,” the spokesperson stressed.

“Clearly there are some sections in the American defence and national security establishment which don’t agree with the Trump administration’s position on [Afghanistan], and particularly the principle stance to withdraw troops from Afghanistan,” Umer Karim, visiting fellow at the Royal United Services Institute, a London-based think tank, says about the fresh Afghanistan ‘bounty’ claims.

“First they used the bounty story based on entirely unreliable and dubious sources to do point scoring on Russia in an attempt to trigger debate again in favour of the need for American troops to stay in Afghanistan. Now they are again attempting to trigger the same debate by going after alleged Chinese spies working to destabilise Afghanistan,” the geopolitical analyst adds.

According to Karim, the “main theme” of the bounty claims is to equate any withdrawal of US forces from the 19-year-long Afghan quagmire to a “surrender” – to the Russians, the Chinese, or other regional actors.

In November, President Trump began a purge of the Pentagon, firing Defence Secretary Mark Esper, reportedly due to a disagreement about the need to bring troops home from Afghanistan. Esper’s successor, Christopher Miller, announced a timeline for reducing troop numbers in Afghanistan and Iraq shortly after, pulling thousands of personnel out of both countries, with a goal of having 2,500 troops in each country by 15 January 2021. The rest of the troops still in Afghanistan could be pulled out by May 2021, if the Taliban* lives up to its promise not to attack US forces. However, it’s not clear if the incoming Biden administration will try to halt and reverse the withdrawal process, with the China bounty stories, despite a lack of evidence, potentially giving the president-elect a good pretext to do so.

President Ghani met with Mr. Christopher C. Miller, Acting Secretary of Defense US. Both sides discussed the Afghan Peace process, the security situation in Afghanistan and in the region, and the continued support to Afghan Defense and Security Forces. pic.twitter.com/aPVsvvknZd

“The timing of these stories also is important as they are intended to re-generate debate on the issue within the national security team of President-elect Biden eventually paving the way for re-visiting the current Afghan strategy of the Trump administration,” Karim explains.

© Photo : YouTube / Campaign Slotkin for Congress
Biden Reportedly Mulls Promoting 'Taliban Bounties Story' Congresswoman to be CIA Director
Antony Blinken, Biden’s pick for secretary of state, has indicated publicly that he would like to see the US keep troops in Afghanistan for the foreseeable future, notwithstanding the US-Taliban peace deal, ostensibly to “prevent a resurgence of terrorism” and “to protect American interests and national security.”

Pouring Salt in US Wounds?

Hasan Abdullah, a political analyst, journalist, and expert on Islamic militancy, believes the bounty claims may be credible, even if the reporting by US media has been thin on hard facts and should be taken with more than a grain of salt.

“Is it in the interest of China to pay non-state actors to kill Americans? Considering what the US has been doing at different levels to contain China’s growth, one can understand China adding salt to US wounds as the Americans stand battered and bruised,” Abdullah says.

The political analyst points out that the US has essentially already admitted defeat in its nearly two decade-long campaign in Afghanistan, “sitting at the table” with the same Taliban it once described as “terrorists” but now views as a “major stakeholder” in the conflict.

“As far as the role of the US media is concerned, despite frequent attempts of the Western media to try and claim moral high ground and promote itself as a champion of impartial journalism, there’s no denying that the Western mainstream media has been a cheerleader and legitimiser of America’s neocolonialist adventures all over the world,” Abdullah says. Accordingly, he believes, “one can understand the US using its media to try and shift the blame for its failures and defeat on others."

© AP Photo / Rahmat Gul
Afghan security forces gather at the site of an attack near the Bagram Air Base, north of Kabul, Afghanistan, Tuesday, April 9, 2019. Three American service members and a U.S. contractor were killed when their convoy hit a roadside bomb near the main US base in Afghanistan.

In February 2020, the US and the Taliban signed a landmark peace deal in Doha, Qatar to facilitate the withdrawal of all US and NATO troops from Afghanistan, a Taliban pledge to prevent al-Qaeda* from operating in areas under Taliban control, and for peace talks between the Taliban and Afghan government.

Abdullah Khan, the director of the Islamabad-based Pakistan Institute for Conflict and Security Studies, says that America’s bounty allegations aside, it’s the terms of the peace process that regional powers like Russia and China should be most concerned about.

The geopolitical analyst fears that the loophole provides the US with the means to maintain influence in the region even after its withdrawal, and even to create instability in countries neighbouring Afghanistan, including China.

Washington, he stresses, “has not insisted much on the fate of foreign fighters in Afghanistan,” with terrorist groups including al-Qaeda, the Islamic Jihad Union, the Imam Bukhari Brigade, and the Turkistan Islamic Party pledging allegiance to Taliban leader Hibatullah Akhundzada, and thus being “practically embedded” in the militant group. Furthermore, “foreign fighters are being concentrated gradually in the north and there are strong possibilities that the northern part [of Afghanistan] may become a launching pad for terrorism in the Xinjiang province of China.”

Tajikistan, where Russia has a military base which helps to shield northern Eurasia from terrorism and drug trafficking, “will also face troubles,” according to Khan.

Ultimately, the analyst warns that the main “question is whether the US is going to play another game in the region as it had [when it] armed and supported the Afghan Mujahideen against the USSR in the 1980s. In such a scenario, Afghanistan [would] become the hub of hidden fights between intelligence agencies of many countries, which may not let peace to prevail in the country.”