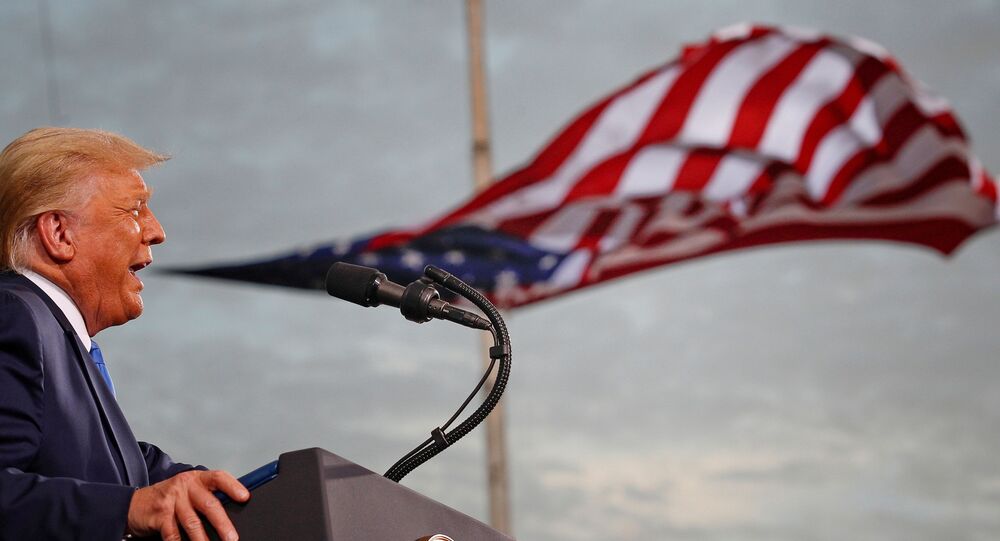 The yet to be announced election outcome has become a subject of heated debate between Democrats and Republicans, with the candidates of both parties, Joe Biden and Donald Trump, crossing verbal swords in the presidential race. While Biden is projected by the media to win, Trump is opposing the early calls and claiming election fraud.

While the Trump campaign is filing lawsuits in several states, vigorously demanding vote recount and claiming massive election rigging, Joe Biden appears to already be assembling his future administration, even though the Electoral college is still to vote and decide the election result on 14 December.

Although The Associated Press made its final call on Thursday, naming Biden victorious in Georgia, Trump's team insisted it has gathered evidence of election fraud in several key states that POTUS is projected to have lost, particularly the Peach State, and announced that a new lawsuit there will be filed Friday.

Michael Shannon, a political commentator and Newsmax columnist, shared with Sputnik his opinion on Trump's fight for the Oval office.

Sputnik: If the Trump campaign can overturn the current vote count in three states – Michigan, Georgia and Pennsylvania – he could gain 284 electoral votes and be a projected winner. The law battle in Michigan is finished with the Trump campaign claiming that they are withdrawing their lawsuit ‘as a direct result of achieving the relief we sought’. The results from Georgia will be out tomorrow. There’s still a legal battle in Pennsylvania. How high are the chances that the results these three states can indeed be reversed?

Michael Shannon: I really can't point out probability. I will point out that Rudy Giuliani in his presentation was very wise to point out the equal protection violations of the vote count because equal protection under the law is what stopped the Gore recount in Florida in the year 2000. And so it's an established fact that if you violate equal protection in an election, those results are going to be looked at by the courts and if they throw out these votes, as Giuliani contends they should and, as I say, he makes a good case for it. Then Trump's chances really improve in Pennsylvania. The Trump campaign waited way too long before they had this press conference. And they lost the narrative for quite a few days, but this press conference is the first step towards getting the president's case out in front of the public.

Sputnik: Giuliani Accuses Democrats of a Centrally-Engineered Election Fraud Against Trump. To what extent do you agree with this claim, given all the facts?

Michael Shannon: I think there was massive fraud. I don't necessarily think that all the Democrats got together in one room and plotted it out. There's a German word for it, "Zeitgeist", or the way people feel in a culture regarding a certain subject. And then the Democrat left the culture and said Trump cannot be allowed to win. And so I think in places that were already corrupt, that had a history of voting infractions, that it was very easy for them to excuse themselves because they think they had a moral issue to defeat Trump. And the left has always felt that the end justifies the means. So at the end is defeating Trump, then that opens up a lot of meat.

Sputnik: Rudy Giuliani said that the recount in Georgia will not give Trump anything. What’s the way out? Going to the Supreme Court?

Michael Shannon: They're just recounting fraudulent votes that they had enough to count. There they will have to, have to, throw out votes now, as Matt Schlapp was pointing out before that news conference began in Clark County, Nevada. They threw out one sixth of the votes there in one county commissioners. Right, because they were so tainted. I think in some state they should throw out votes and seriously consider having a do over. They did that in North Carolina in a congressional race. The complicating factor is the Constitution set a date for certifying votes or it goes to the House. And I don't know if you can do a revote in that amount of time. It could be that the Supreme Court ruled that these votes are so tainted that the vote, the decision needs to go to the House of Representatives.

Sputnik: We also saw statistical spikes in the vote count which the Trump legal team also mentioned during the Election deal. Why did that happen in the first place?

Michael Shannon: You just have to look at it. Why did they stop counting? I wrote a column last week and I said if the left wasn't cheating, why are they acting like they're cheating? And stopping The count is a time tested way of you organizing a massive vote. And you notice they didn't stop the count in any place where Trump was behind. They stopped the count in places where he was ahead. And so you stop the count because you want to start finding enough votes to overcome the person's lead that you don't want to win. And so that's where I think you get those statistical spikes that where all these Biden votes are. You see, it's very strange that Biden has no coattails, that that's a phrase meaning here in the states that a candidate is so popular and his popularity rubs off on other candidates and brings them to victory, too. Well, Biden has no coattails whatsoever. They lost 12 seats in the House and Trump in a year when it's pretty much a red wave in the House. Remember, the predictions were the Democrats were going to gain 10 seats and the Republicans have already gained 12 in a year where Republicans gained 12 seats. Their presidential candidate loses? So many of these things just defy logic.

Sputnik: Trump's legal team lashed out on media coverage of the election process and chaos after Election Day. What role does the media play in this chaos?

Michael Shannon: The so-called Biden victory has now entered the realm of global warming, it's settled science. And so if you dispute the Biden victory, you are a denier who is undermining democracy. What the mainstream media, what the opposition media has done is create this narrative where Biden is the winner because we say so.  And that's not the way it works here in the US.

Sputnik: We also saw several reports that lawyers were withdrawing from representing Trump. Why we were seeing this fear? When people support the president, they want to represent him, but they still withdraw from the case. Why is this happening?

Michael Shannon: It's mob rule, as I said before, for the left - end justifies the means. And if the meme threat is intimidating, threatening, exacting revenge on Trump's lawyers, then if it keeps him from winning, that's fine. You just have to look at. Have you ever heard of a lawyer who defended a murder suspect? Having to withdraw because they were threatened and or a child abuser or a serial killer? Now, it's just Donald Trump.

Sputnik: We saw claims that ‘Let us not become Venezuela’ and software issues and the Dominion and Smartmatic allegations. How do you assess these claims?

Michael Shannon: I think those are the weakest, unless you can, you know, that's kind of guilt by association, I think it looks suspicious. I certainly wouldn't pay for a software system from Venezuela, of all places. But I think that might be a bridge too far for the legal team. I think that the affidavits, the statistical analysis and the just general unbelievability of these late night returns are much stronger case than the Dominion software.

Sputnik: To what extent  can we expect this case to set a precedent for voting reform in the US?

Michael Shannon: If Biden wins, there's not going to be any reform because Republicans won't win in the future. So they just steal the election. If Trump wins, I think that will be a great impetus for reform in the future. I think we'll just have to see how this plays out until we know what's going to happen.