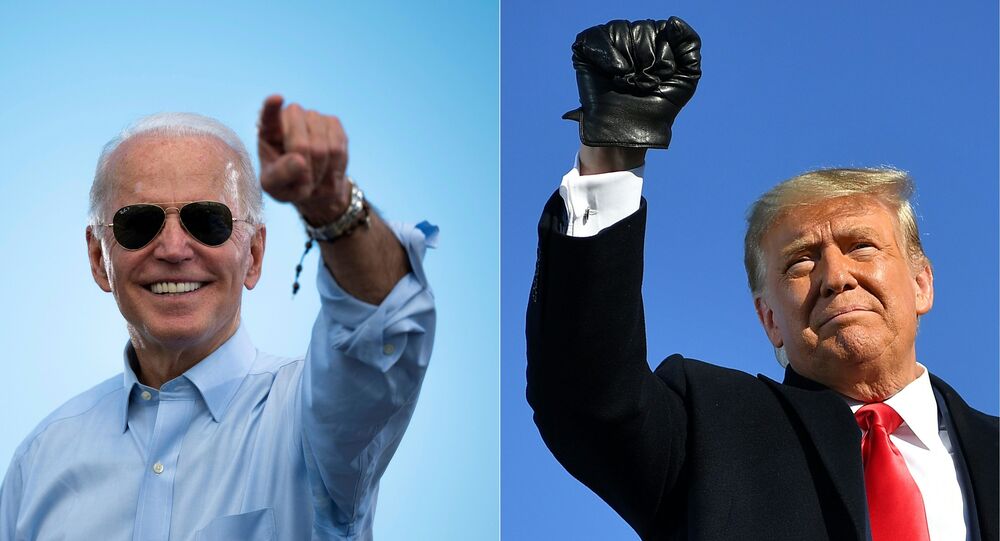 The United States is casting ballots in the nationwide election to decide who will sit in the Oval Office for the next four years: incumbent GOP President Donald Trump or Democratic candidate Joe Biden.

Michael Shannon, a Conservative political commentator and Newsmax columnist, believes that US President Donald Trump has a lot of momentum which makes a victory a plausible outcome.

Sputnik: Today is the Election Day and Americans are choosing between Republican President Donald Trump and Democrat candidate Joe Biden. What are your predictions?

Michael Shannon: It's going to be a test of how strong a motivator is hate, because from what I see, there's no enthusiasm at all for the Biden campaign. Their big motivation is hate for Donald Trump. Whereas on the Trump side of things, a lot of people genuinely like the president. My wife, for example! And their enthusiasm for him is visible and always rallies. And then we've had a phenomenon here of car caravans, which are spontaneously organised by people themselves. They're not coming from the campaign. Now, as to predictions, two weeks ago, I was pretty negative on the president's chances. But now he seems to have a lot of momentum. My wife, my daughter and my son are all convinced he's going to win. And right now, I'm hoping they're right.

Sputnik: We’re seeing support for the president increasing in key swing states including Florida, Michigan and Pennsylvania. During Trump’s recent rally in Pennsylvania, we saw what were claimed to be really huge crowds of Trump supporters. How would you assess Trump’s chances of taking crucial battleground states?

Michael Shannon: I think he can, because going to a Trump rally is not easy. You need to get there about five hours early and you wait in line for five hours in the cold and usually outside. And the Secret Service has to do a search of you. And then once you get inside, you have to wait, in many instances, in these outdoor rallies - there's no place to sit. So these people are highly motivated. And I even saw on Twitter a caravan of Amish, the people here who don't believe in modern conveniences. So it was an all these horse-drawn carriages with Trump signs on it. It was really funny. And if you've got the Amish putting together caravans for you, I think there's a good chance you can win Pennsylvania and Biden's comments about fracking are just insane. A lot of people are involved in the oil and gas industry. And he essentially told them he was going to put them on the unemployment line.

Sputnik: Experts suggest that election night may be fraught with irregularities stemming from a number of factors, including delays in results coming in due to problematic ballot counts. In your view, when can we expect results? Will we have a winner by the end of the night?

Michael Shannon: I wrote a column about this three weeks or so ago. And unless it's a landslide either for Trump or Biden, I don't think we will know. In the column, I contended that the left is using Election Day just as a benchmark so they'll know how many ballots they have to discover or find or discard, if they're Trump ballots in the days afterwards to eke out a victory. That people say that, well, you know, hundreds of millions of people vote. You can't steal on election nationally. That's not true because as you pointed out, there are a few battleground states. And the last time in 2016, someone calculated it and said a change of a hundred and forty seven thousand votes would have given Hillary Clinton the election. Well, one hundred and forty-seven thousand votes is a tiny percentage of the total votes cast. So even say one or two percent fraud in Pennsylvania could throw the election to Biden. And that's what Trump supporters and conservatives are concerned about with this ballot counting after the Election Day.

Sputnik: So we can see a scenario as an election result could come down to a Supreme Court decision?

Sputnik: Currently American media and show business support the DNC. Why is this so, in your opinion?

Michael Shannon: It's because conservative leaders were asleep for the last 30 years and they allowed the left to take over the educational system, starting in kindergarten all the way to higher education. And they've been indoctrinating children for the last 20 or 30 years. And conservatives let it happen. They didn't do anything. And so you have the entire popular culture, and that includes Hollywood - actively promoting a leftist worldview. And so that's why culturally conservatives are behind. We didn't do anything to prevent it.

Sputnik: How do the Republicans maintain their base and win elections, despite having less media power than Democrats, as we assume that most of the mainstream media can be described as ‘Democrat-leaning’?

Michael Shannon: Because the basic American people aren't as nutty as the leftists are. And in the rural areas in middle America, there is less of that pervasive culture. And that's one reason that they are able to still win elections.

Sputnik: US city business-owners are currently preparing for riots and clashes on Election Day, covering their shops, stores and office windows with plywood. In your view, how we will see the streets react to the election results?

Michael Shannon: I think leftist voters in all these cities run by leftists are going to riot if they win, because it will be a victory celebration, as we saw when the Los Angeles Lakers just won the NBA title. They trashed part of LA. And if Trump wins or it looks like Trump wins, I think we'll have Election Day violence on the scale of what you see in a banana republic in South America.