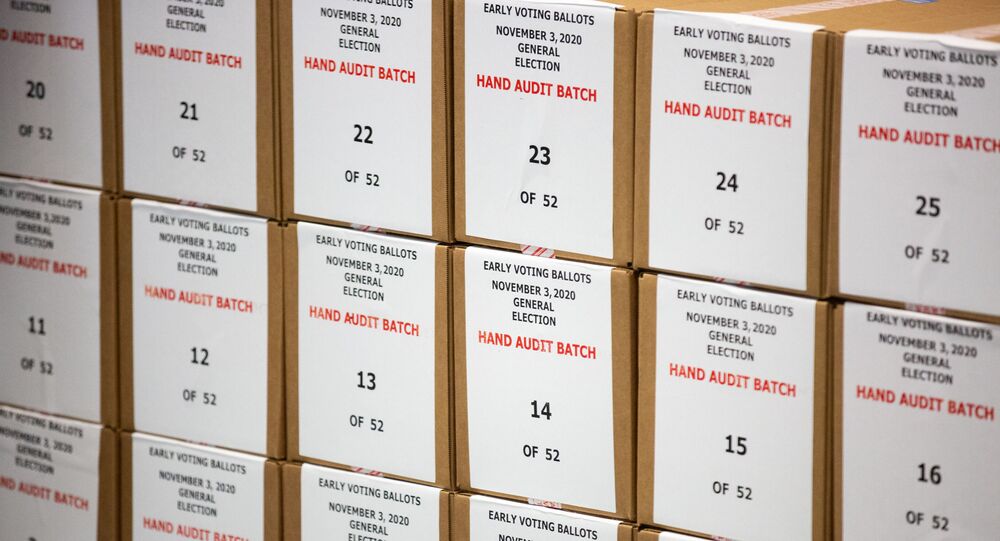 The US presidential campaign has entered its final lap as the nation is poised to cast their ballots on Tuesday. Trump is certain he will prevail despite various polls suggesting that Biden has a lead over the president. However, the 2016 election secured Trump's win despite predictions by the surveys.

John Kavanagh, a Republican member of the Arizona House of Representatives, who represents District 23, believes Trump is a more popular candidate than Biden as all his supporters vote for him, whereas Biden's supporters vote against Trump, rather than for the former vice president.

Sputnik: According to poll results, Donald Trump is slightly ahead of Joe Biden in Arizona. To what extent do the polls really reflect the feeling on the ground among voters?

John Kavanagh: I think whatever poll you look at, you have to increase Donald Trump's percentage by perhaps two to four percent. Because a lot of people, when asked - who are Trump voters, will not say so because they're afraid that they'll be attacked, criticised, lose their jobs, shamed, because the environment is very politically toxic. So, I think that Arizona is divided. This is a very divisive election, but that fortunately, Donald Trump seems to have the majority of the votes in Arizona. So I expect him to win.

Sputnik: So the support for the Republican Party and the incumbent president in your state is high?

John Kavanagh: Yes, I think that he will take Arizona. And it's also noteworthy that a lot of the votes for Biden are not for Biden, but they're against Trump, whereas almost all the votes for Trump are for Trump. So the more popular candidate really is Trump.

Sputnik: But why did we see this shift in the polls when we saw that Trump may have lost Arizona? Because some months ago, we saw that he's really low in the percentage in votes. So what are the problems with Trump addressing the public in Arizona?

John Kavanagh: If Trump loses, it will be two reasons. First – COVID, which he had very little control over, the way it destroyed the economy and created so much social disruption. And I'm not talking about riots. I'm talking about people's lives being made boring. And the second reason is the news media has exposed itself as being unbelievably biased against Trump. They rarely carry any negative stories about Biden using ridiculous excuses, like it's not a founded story when even the most idle speculation was front-page headline news for Trump if it was negative.

Sputnik: So that has somehow influenced voters?

John Kavanagh: Yes, but I don’t think there’s that much voter fraud - there’s some. But if he loses, it's because the media were against him and very biased. And the COVID-19 really dampened the phenomenal economic recovery that he was managing and generally made people feel poorly.

Sputnik: Speaking Friday in Arizona, VP Pence sought to draw attention to the economy, an issue where Trump has usually led Democrat Joe Biden. He stated the following: "Men and women of Arizona, the choice we face this coming Tuesday is a choice between a Trump boom and a Biden depression”. How would you assess the VP’s statements?

John Kavanagh: I agree 100 percent. The economy needs to be boosted and helped. And you don't boost and help an economy by adding expensive regulation, especially in the green energy field and raising the taxes of people who create jobs and run businesses.

Sputnik: Democratic vice-presidential candidate Kamala Harris also visited Arizona last week to make a final appeal to Arizona voters. How broad is the support for the Biden-Harris team in your state?

John Kavanagh: I don't think there’s much support for Kamala Harris. She's the most liberal Senator in the US Senate. So she can't pretend to be moderate and get away with it like she's trying to. And in addition, she really doesn't have that much name recognition.

She was a failed candidate for president in the Democrat primary. So I don't think she adds much to the ticket. And I think a lot of people are petrified that, should Biden step down, she would actually become president - which even the Democrats didn't want in the primary.

Sputnik: The people of Arizona are also voting for their Senators now. The Democratic candidate is Mark Kelly, and, according to the latest polls, he leads Republican incumbent Martha McSally. In your view, why are we seeing this shift in the Senate race? What is your prediction?

Sputnik: We have seen reports that Trump and his top aides are planning a huge overhaul of his Cabinet if he wins a second term. In your view, how might policy shift? Is there really such an urgent need for Trump to change key positions in the administration?

John Kavanagh: I have no idea. This is the first I've heard of that. But Trump's a businessman. He changes his staff very often. So I wouldn't be surprised. He's a mover and a shaker. It's like a show, The Apprentice – “you're fired”.