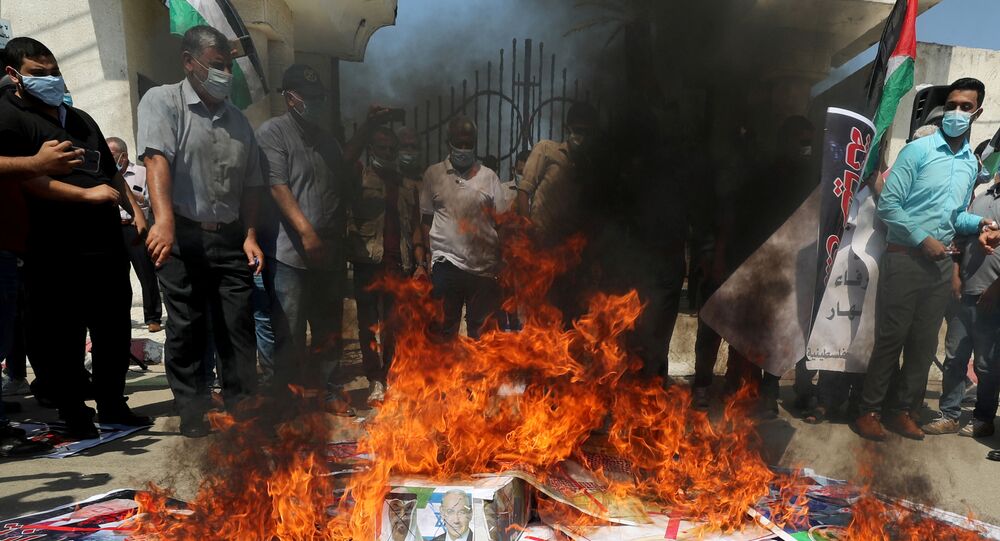 The Palestinian uprising in the early 2000s claimed the lives of more than a thousand Israelis as well as thousands of Palestinians. Could such a scenario unfold again, 20 years after the so-called second Intifada? A former IDF colonel is highly doubtful this will play out.

As Palestinian anger with the historic agreements inked between Israel, Bahrain, and the UAE earlier this month continues to grow, reports have emerged that a third Intifada, or a popular uprising, is just around the corner.

Since mid-August, when the United Arab Emirates announced it would normalise ties with Israel and Bahrain following suit shortly thereafter, Palestinians in the West Bank and Gaza have organised a number of protests decrying the move.

Chanting anti-Israel and anti-American slogans, they stepped on the flags of the Gulf nations and burned the images of "the traitors", who dared to strike a deal at the expense of "the Palestinian cause".

Another Intifada Not an Option

But for Eran Lerman, a retired colonel, who held various senior positions within the IDF's military intelligence, these protests are unlikely to translate into a massive popular uprising.

"Although it is difficult to assess whether an eruption may happen, the feeling of deprivation and frustration that usually moves the middle class to revolutions is simply not there. They are more interested in how to improve their lives and buy an apartment in Rawabi, than in mass protests".

That feeling of political disinterest has been in place for some time now, says Lerman. When the threat of Israel's so-called annexation plan, presupposing the biting off of parts of the West Bank was still on the table, the Palestinian Authority (PA) tried to rally people but apart from several demonstrations these attempts have largely failed.

The raging coronavirus, which has already infected more than 46,000 in the West Bank and Gaza, could partly explain why Palestinians preferred to stay at home, rather than take to the streets, Lerman notes.

"Palestinians believe that the PA is so corrupt that the whole idea of being governed by them or to put their lives [at risk] for them doesn't appeal to the masses. Plus, many look at the revolutions of the Arab Spring and understand the price they would pay for such chaotic actions", Lerman says.

However, contemporary Israeli history shows that an uprising does not necessarily have to start from the masses. It can be instigated and organised by the leadership.

Such was the case in the early 2000s with the eruption of the so-called Al-Aqsa Intifada, allegedly provoked by then head of Israel's opposition Ariel Sharon, who visited the Temple Mount, a plateau in Jerusalem deemed holy for Jews and Muslims alike.

© AP Photo / Khalil Hamra
No Regrets: Riots Were Justified, Says Palestinian Prisoner As He Looks Back At 2000 Intifada
Even though the Palestinian leadership at the time tried to market his move as a spark that led to a fire, causing riots, clashes with the IDF, and subsequent suicide attacks against Israeli targets, decision makers of that intifada have since admitted on a number of occasions that Sharon's visit to the Temple Mount was just an excuse and that the revolt was carefully planned and masterfully executed.

At the time, the Palestinian leadership was frustrated with the lack of progress in peace talks and with the collapse of the Camp David negotiations, where then-Israeli Prime Minister Ehud Barak promised PA leader Yasser Arafat control of over 90 percent of the West Bank, an offer that was rejected.

While the current Palestinian leadership appears to be equally frustrated with a reality, where Israel inks agreements with Arab nations that over the years provided the PA with political support and financial assistance, the chances that this frustration will spill over into a revolt similar to what the region witnessed in the early 2000s are slim.

The reason for this, believes Lerman, is the grim repercussions such a move would entail.

© AP Photo / Majdi Mohammed
By Responding With Force to 2nd Intifada Israel 'Won the Battle But Lost the War' - Ex-IDF Commander
For Palestinian President Mahmoud Abbas, who controls the West Bank, such a step could be "suicidal", simply because it would mean Israel will not help the PA foil potential attacks against its government.

For Hamas, in charge of the Gaza Strip, opening a full-fledged war with Israel is not an option either, especially not after three rounds of intense fighting (in 2008, 2012, and 2014) and not during a pandemic that has deteriorated an already dire economic situation in the Palestinian enclave.

Knowing that separately they will not stand a chance in the face of Israel's growing influence, the two factions now seem to be joining forces.

Last week, representatives of the rival factions met in Turkey to mull over "challenges and plots that target the Palestinian cause" and ways to minimise the blow dealt to them by Arab nations.

Lerman, however, remains skeptical that these reconciliation talks will be fruitful, especially given that previous attempts to create a bridge between the two sides (at odds since 2007) have largely failed.

"The main question is who will be in charge of the armed forces if these factions end up cooperating. The Palestinian Islamic Jihad is an autonomous entity that gets instructions from Iran. Hamas is independent and the PA will not put its security apparatus under the Islamic group", Lerman suggests.

Yet, even if the unlikely happens and the Palestinians do find a way to come under one umbrella, Lerman, who knows the ins and outs of Israel's security capabilities, says the Jewish state is ready for any challenges thrown its way.

"Our intelligence is up to par and the Shin Bet [Israel’s Security Service - ed.] has foiled many terror cases thanks to the fact that they have been living in social media networks. So in this sense Israel has learned the lessons of the past and it is definitely ready".