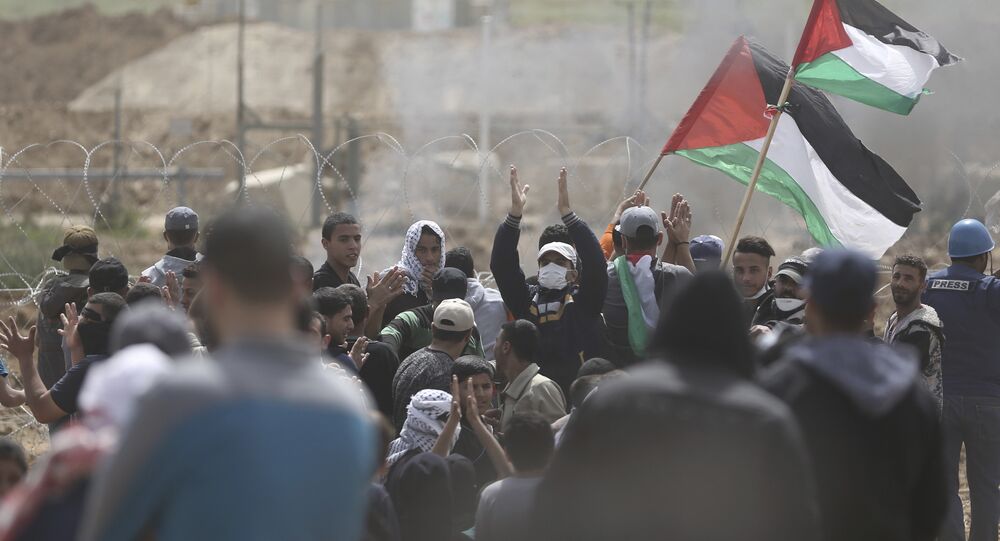 No Regrets: Riots Were Justified, Says Palestinian Prisoner As He Looks Back At 2000 Intifada

During the second popular uprising which began 20 years ago, the Israel Defense Force jailed hundreds of Palestinians, who had been involved or suspected in terrorist activity. Mohammed Salem was one of those who served a long sentence in an Israeli prison but he still says the intifada was "a natural response to Israel's aggression".

Mohammed Salem, a Palestinian from the city of Rafah in the south of the Gaza Strip, says he remembers well those days in September that started the second intifada, or popular uprising.

On 28 September 2000, the leader of Israel's opposition, Ariel Sharon, visited Temple Mount, a plateau in Jerusalem which is a holy site both for Jews and Muslims.

Although his official reason for visiting was to inspect the construction works taking place in the area, Palestinians viewed his visit as an act of aggression.

However, when protests started spreading - first in Jerusalem and then in the West Bank and the Gaza Strip - they did not catch Israel by surprise. In fact, the Jewish state was well-prepared for riots and a potential upheaval.

Thousands took part in those demonstrations, hurling stones at the Israel Defense Force (IDF) and clashing with the security workers, venting their anger at Sharon's move in particular and Israel's approach to Palestinians in general.

"Sharon's visit angered us but that was not the final straw: the killing of protesters was," Salem remembers.

This was why he, with thousands of others, took to the streets of Gaza and clashed with Israeli forces to protect what he called their "land, property and holy sites".

During one of these clashes, things got out of control.

"In one of the demonstrations, soldiers decided to open fire against us, so to protect myself I started throwing more stones at them".

Moments later Salem, who was then 25, was arrested and Israel accused him of killing an IDF soldier, allegations he denied.

However, the denial didn't save him from prison and in 2001 the military tribunal ruled that he would serve 15 years in prison for his participation in riots that led to an IDF soldier being killed.

"I never killed any soldier but back then Israelis insisted on punishing us and jailed many Palestinians to put an end to those protests".

In her interview with Sputnik, Miri Eisin, now a retired colonel, who during the intifada served as deputy commander of combat intelligence corps, admitted that in the first months of the uprising Israel filled its jails with many Palestinians, who "threw stones" or "obstructed a daily life," something that instigated more violence against the Jewish state.

In prison, Salem didn't change his attitude to Israel. On the contrary, now that he is free he says the hatred that was burning back then has only got stronger with time.

But he has altered his perception of the Palestinian factions even though for the 15 years he spent in prison, the Palestinian Authority has supported him financially, paying him a monthly salary for the deed he did.

"Those Palestinian factions have the weapons and the ability to expel Israel from our lands. Yet, they choose not to do it".

Instead, Salem says, the Palestinian leadership prefers to sit down for talks with Israel and write down agreements with the Jewish state, just as was the case with Hamas which agreed to stop launching rockets and incendiary balloons into the country's southern communities in exchange for millions of dollars of Qatari money, the opening of the Erez crossing and a number of other concessions.

Now, however, things seem to be changing. Since 13 August, Israel has managed to reach deals with two Arab nations - the United Arab Emirates and Bahrain - that previously had no relations with the Jewish state.

And as reports emerge that more Arab and Muslim nations are set to follow in their footsteps, bypassing the Palestinians, the leadership of Fatah and Hamas need to recalibrate their routes, putting differences aside and opting for unity.

Last week, representatives of Hamas and Fatah met in Turkey to discuss reconciliation and consider what steps the two factions could take to minimise the impact of the blow they suffer as Arab nations choose a peace deal with Israel over "the Palestinian cause".

But even though they now seem determined, Salem is less optimistic that these talks will end up bringing the two rivals together, especially considering similar efforts that have failed over the years.